Rivermark Community Credit Union is the worst bank/credit union ever. There are too many problems to list, but here are a few:

1. Card declined & account frozen when trying to get an uber back from a flea market in Montreal. Not the best corners of the city, it was dark & I was alone.

I had told Rivermark TWICE, that I would be in Canada & for which dates.

Then, had to be on hold with after hours security (which for them is a third party) for nearly 40 min + the time it took for them to resolve the issue, all the while being charged heinous roaming fees.

Also phone was doing to die in which case I would be really screwed.

It was a close call.. Fortunately AT&T worked with me to adjust my fees.

Imagine that portlanders, AT&T was the compassionate and helpful one!!

2. I rarely use checks but recently moved into a new apartment.

I had some checks printed at the branch so that I could send rent on time, for the first time, to my new landlord.

The teller printed checks linked to the WRONG account, the check did not go through, I had to pay a $25 fee AND worst of all, left a horrible first impression on my landlord!! Wtf!

3. I was in Hawaii for a few weeks for a teacher training, six months pregnant.

I took a later flight with a car reservation because in Maui, late at night the taxis can be scant & buses are rare. My card declined!

I ended up having to track down a taxi & go back later only to have it decline again.

As the first horror story, I notified them that I would be there between this & this day.

Talking to them over the phone, they couldn’t actually figure it out until the THIRD try, when finally they were able to allow my CC to work.

So much wasted time, taxi money going to the rental place, and frustration. Why am I surprised?

4. I went to deposit a check for 4k. Then went to get some food up the street on Hawthorne.

SURPRISE, my card declined, again. I thought to myself, that’s weird, I know there is $ in there, before and after that check deposit transaction.

So I checked on the app & it said I was 39k negative! I thought how is this even possible?!Does any bank let you overdraft nearly 40k? Anyway, again, wasted time on the phone, these people are brainless mouth breathers barely aware that they possess a human form.

5. Last horrid offense, and yes I’m going to bank elsewhere. Well I was told I was being sent a new debit card with a chip.

I waited. And waited. And waited more. (3 weeks total) Finally the first approached (of this month) and I needed to pay some bills electronically, because it is after all 2016. (Rivermark doesn’t think so it seems) So I drove across town on a Saturday and waited in their slower-than-mud, BO ridden, SE hipster line.

I ordered a new card & had it printed there. I sent out my new card info to pay some bills and.. I bet you can’t guess.. Yep, declined again.

I called, it was super inconvenient as I was running errands & needing my card (now 8.5 months pregnant).

Apparently the teller ‘ordered my card incorrectly!’ Seriously? Is this rocket science?

This bank does not even deserve one star. It’s a terrible place full of mindless incompetent workers. There are more offenses I’ve experienced but I think these key experiences tell you enough. I wanted to stay because I love the financial advisors and started my retirement & IRA fund with them, but my general banking experiences with them have been nothing but appalling. 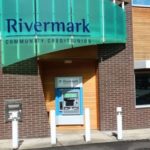