I started following the diet last month. Although I do not weight a lot of extra lbs, but I needed to shred few inches. When I checked the claims made by mayo clinic diet, I was pretty surprised to check the results they say they have been able to achieve. If these claims would have been made by anyone else, I wouldn’t have given a damn. However, being developed by experts at Mayo clinic which is one of the best hospital systems in the USA, I decided to give it a shot.

I even suggested the same diet plan for my friend who has serious weight issues and wanted to reduce desperately. We both started to use the plan the same date. We paid for the diet plan and received our optimized plans. Based on which, we started to eat as per the instructions.

According to the plan, the diet must contain of vegetables, fruits, and some amount of physical activity as the base of the pyramid. The next layer must be of carbs and the following layers are divided as protein, fats and sweets at the end of the layer. The diet plan is basically set around the pyramid. The diet encourages to limit the size of the protein and balance the nutrients as per the preferences based in the food pyramid.

Trust me, when I checked this shit, I was really enthralled. Since ages, I have been keeping protein as the first preference. But the diet plan changed most of the conceptions I had. Thinking the same, my friend and I, both started to following the plan until this month. I was looking forward to a drastic change as I needed to shred just few inches. Though I could have done that by reducing the meal sizes, I wanted to keep the nutrients level intact while doing so.

The experiences were pretty much similar for my friend and myself. If you have ever used a diet that tells you what to eat and what not, you are very much sorted. All you need to do is manage the ingredients and eat whatever is asked for. The problem with this diet plan was that it was very restrictive and some of the options were not even readily available. The choices weren’t much and the diet plan asked to eat exactly as listed.

So, we had to go through a lot of trouble being able to maintain the ingredients every day. Both of is work full time and rarely gets time to shop. However, we religiously followed the diet plan. However, I started feeling shortening of breath which was worse in case of my friend. When I tried to contact the customer care, I was told that weakness is related to adjustment of the body habits and will go away in few days.

However, for the entire month, I never experienced it going away. My friend was even in bad condition. The problem was that we started the diet plan and exercises as per the diet instructions, never missing anything from the list, but the results weren’t commendable.

The first week, we did lose some of the water weight. To start with, this was very much acceptable. I knew we would lose some weight in the beginning, however, I was looking forward to the changes in the later weeks of the month. But as the time passed, we kept expecting changes and did not see any. We were not checking the weight as we wanted to leave it for the end of the month. So, we did not know if the diet plan was working.

As we were getting weaker, the eyes went inside and the face looked dull. This should not be a case with proper diet plan. After a month, when we stood on the scale, we were shocked. The fat ratio was increased. We looked lean, but measured more. The muscle mass was gone. As for me, I always looked tired. Do not ask what my friend looked like.

We both were highly disappointed in the plan and decided to ask for a refund. These guys told us that they won’t do such thing. They complained that we had not followed the diet plan strictly. Is there a way to keep a tab on that? I am not sure. What is their strategy to find out if one has followed the diet plan or not?

Anyway, I kept calling and these guys started ignoring my calls. There were times when my calls were disconnected in purpose. I could hear people talking to themselves and laughing at me. These guys are unprofessional. I have never been cheated like this. I have stopped following the diet plan that these guys have offered.

My friend has also stopped. She had to see a physician after these problems. After the blood reports, her haemoglobin was found on the lesser side. She has been given pills to compensate for that. I did not go through those problems but I did have to face a lot of other issues. Not only there have been no change in the inches that I desired for, the diet plan has actually made me fat, in the fitness terms. It has reduced my mass ratio and has increased fat percentage.

I look nothing like I used to be. This entire month is a shame and believing that I can make better changes to my body was an illusion. If you wish to save yourself from all these troubles, do not pay these scammers. These people are shameless and beyond correction. You can only get yourself stuck with this unworthy plan. You must look for better options. Or, you may end up losing your healthier counterpart of yourself. Mayo clinic diet is a fraud plan. You must seek help from an expert when trying to lose weight. Improper and baseless plans would ruin your health and body as it did to us. 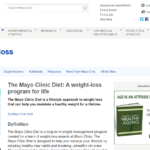