I regularly order a Sativa for my daily alertness, not from Ganja Express but from a different source. When I got to know about Ganja Express through a friend, he sounded very excited about the quality that he had received from it. He told me how the high that he got from the product that he ordered from Ganja Express was something he had never got before in life. He was so excited that without asking me, he ordered a Sativa Brainstorm Haze for me. It was higher in price than the usual ones that I used to buy, but because he sounded this excited for the quality of the product, I thought this might be worth it.

I have tried Indica and got to know that that is not my thing, so I had switched to Sativa. The parcel was supposed to be delivered to me within 2 days’ time. Because he had ordered from Ganja Express, I canceled the deal with my regular dealer and was waiting for this to come. I am smoking Marijuana for 20 years now, so I get to know the difference between Sativa and Indica just by seeing them. In fact, all my friends who do not understand the difference between both take my help so that their dealer doesn’t charge them extra by selling another product in the name of some other. The parcel arrived and I unboxed it, I could tell you from the first sight that it wasn’t a Sativa.

If it had been somebody else, he couldn’t have told you a difference between them, but not me. The thing is, that there was a very little difference in height. But these leaves structure, I had only seen in Indica and not in Sativa. I called my friend to check with him about whether he had ordered an Indica for me, by mistake, he said nope. How could he make a mistake in selecting my choice, because he knows me from 10 years now and has been asking to convert from my choice to his’s? His choice is Indica.

So I built upon the confusion and wrote to Ganja Express about this confusion. A day later they replied and their reply was shocking. Instead of asking me to provide any sort of photographs, they were not ready to believe me. And they asked me if I was sure of the claim that I was making, because they alleged that never had ever, Ganja Express received such a complaint in its history, to date. So to make sure they got it right, I wrote them back informing how mistakes happen and when they happen, it’s always a first time.

This time they got themselves right and asked me to send a photograph of their photograph and I did. A day more in these conversations and I really wanted something to smoke, so I ordered my choice from my dealer, thinking that when the clarifications would be out, Ganja Express would pay me back, obviously because it was their mistake. Instead what I got from them is an email that apologizes for their mistake and asks me to compensate for a gift card. I told them, how my friend had ordered this product and not me. I am not their regular customer and wouldn’t like to buy from them in the future.

And, perhaps it was their mistake and not mine, I should be given a choice between money back and compensating on a gift card. They didn’t agree. So here’s the thing then, Ganja Express, you guys are cheat! Offering someone a gift card because of your mistake isn’t way of doing business. This is just like robbing someone off. I am not gonna buy from you in the future, I wasn’t even going to buy from you in the past, it was my friend. But I tell you what, even if I would have bought it and you would have made such a mistake, I would have been damn upset. Because of you, I had to spend double and perhaps even more than it, to receive the same Marijuana quantity and quality that I used buy and all I get is a gift card from Ganja Express! All of you who are reading out there, don’t buy from them! They are cheaters.

Write a review or complaint on Ganja Express Cancel reply 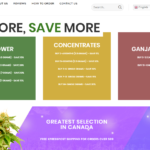