I only needed very minute refinement of hump which was actually not such a big deal to be removed from my nose. Dr. Ashkan completely ruined my face. I never have thought of such result as the surgery was very minor and there wasn’t any problem. I just needed very little to fix and in turn this doctor changed my entire face which looks like someone else’s.

Without any prior suggestion or discussion, dr. Ashkan did something completely different than what was agreed upon. He took away 5 mm. For those who do not know, this is huge in terms of rhinoplasty. He took away my nose bridge. It is so bad that I am not even able to wear glasses. They do not stay on my nose.

This is just one issue. I can elaborate many. However, to keep things short, I am just highlighting the major issues that this doctor put me into. He made my nose bridge look flat and wide. Because of which, my eyes even started looking different. Even worse, my tip has grown like massive and giant end of my nose.

This is not the first instance. He has ruined many cases and mine was one among them. He is trained to get away with patients like these. Dr. Ashkan Ghavami is a lunatic and arrogant guy. He should not be permitted to practice. His results are more than worse. He plays with people’s identity. Mine was shattered. I have been consulting other doctors and all of them have the same feedback. They felt bad for me.

One even suggested that I should ask for a refund when I said that I would be requesting for another surgery. However, that doctor suggested that nothing would work as he would again make the situation worse. If he could do that once, he can do that again.

I am not going to dr. Ashkan’s clinic again for another surgery. I have all the proofs. I have my old photos which whenever I compare with the way I look now; I get into depression. I have been dealing with depression from the day I first looked into the mirror after the surgery.

Dr. Ashkan told me that the nose will go through changes in few months and the looks will settle. He said that it won’t look the way it looks now. I waited for months before writing this review. I am also aware that he suggested such thing to get rid of me. Most of the patients will consider it their destiny after months of distress or would choose another surgery consulting another doctor.

I have the same choices. And, I will do something about my nose. However, I won’t sit back talking about the fraud this doctor did to me. I was very beautiful and was not at all in hurry for the surgery. I only consulter him for some advice. He pushed me to get the surgery done and offered discounts if I registered myself right away for the surgery.

He did all that to take my money. I should have known that no great doctors use the marketing tricks to lure patients. I checked the reviews of the doctor online and was shattered to see how he has been playing with people’s life from years.

I am sure he has done everything to take away negative reviews from his website and Facebook account. And, he keeps dealing with the ones posted on different websites. But, people like me always pop up writing the real reviews. So, it was difficult to find the real reviews in the beginning. You will have to look more carefully and you will find many feedbacks about his backstabbing. Most of the reviews would talk about the unexplained surgeries. He would say something else before the surgery and would do completely opposite of that.

The staffs are rude too. I have been calling him and his clinic from months to get my refund which he refuses to return. And, everyone in his office start getting too vocal. These guys are scammers. They are playing with lives of people. A face is what one looks in the mirror every day. Checking the worse changes only because someone did not know his job, makes one feel upset every time.

I have been behind this doctor for my refund and would keep calling him until he gives back my money. Anyway, he cannot return my beauty, the least he can do is return my money. I have been planning to contact other victims and file a composite complaint against this man. I would be happy to see him behind bars.

Write a review or complaint on Ashkan Ghavami Cancel reply 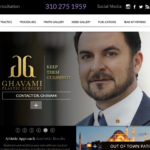