As shown through yelp and online searches, Tara Bernard reveals simply speaking that NY is just a shell company created to get tax shelters and COVID-era loans.

I [thought] I hired them after talking to Tara through email, and then she reassured me they could help my child. She then had a conference call with a “therapist” on the phone, and after it sounded like we had a plan to help my 4-year-old, I paid an upfront fee for the intake and initial appointment – $500, and no one ever showed, no one answers the phone, and after checking yelp I discovered I’m not the only parent scammed and duped by Tara and simplyspeakingNY (who is not licensed for Riverdale or Westchester, it turns out after all – despite Tara’s claims that she is legitimate

you should never be involved with anyone who will scam or hurt children for money, and Tara is one of those people who have no conscience – she uses her position of authority to abuse children and scam parents as my child wonders what happened after the intake when the “nice lady” never returned for any speech therapy or lessons to help, which is the whole point

Write a review or complaint on Tara Bernard 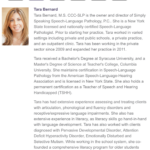