I was not aware of the background of the person running Serenity Recovery. That was the reason I sent my son to this center for getting rid of drug addiction. I was given lots of hopes and people assured me that they had the highest recovery stats as compared to other centers in the city. I am not much computer savvy and did not know how to check online reviews and do detailed research. I believed in what few people had to say. I was referred through a friend. Later, I came to know that the center offered a referral fee.

The person behind the center, Per Wickstrom, is one among those who had many lawsuits against him. He was himself an addict. He got sober after getting into an addiction center. It is not about the addiction, but he also has criminal records which contradicts the noble cause that the center is based on. I came to know about all this when my daughter tried to search about the facility. Serenity recovery is a place where patients are admitted for preparing them for a worse tomorrow. The center is filled with criminals as Per Wickstrom uses the court-ordered addict as a tool for getting more referrals. Once, these people complete the Narconon Program, they are hired among the staffs.

If you are wondering about the trained counsellor, I will have to disappoint you. My son was kept in that center for more than 30 days and there were rare chances when he talked to a trained counsellor. It was shocking for us to know that most of the certificates that they flaunt, are fake. The programs are not scientology based and there is no mention of Narconon on the website either. The center is only a hub for gangsters and people with criminal record. It is no surprise that the rehab cult that is run by Per Wickstrom, abuses and mislead its patients. The number of causality is threatening. There are 14 recorded death and I am sure this is not the correct data.

A woman died after drug overdose during detox. You can very much understand the kind of unexperienced and fake staffs this center appoints. The only thing that matters to the management is the money rolling in. If you die, that is your problem. So, when you enrol with their program, you can expect only disasters. There are many other incidences that my son told me after he was released. When he was inside the center, we were not allowed to meet him without a staff accompanying us. He never had a chance to explain things in a better way.

He said that the center was charging the insurance companies way more than the amount they showed to the patients. A man’s insurance company was charged with $200,000 when he was told that his recovery costed $20,000. He also affirmed that he was shifted to different facilities without given any reason. The worst part was, this man never did drugs. He wanted to dry out. But, he did not have $20,000 for that. So, he was advised to go through a detox program to get a claim from the insurance company. He was shifted from one center to another and was charged with $200,000 without an addiction to drugs.

That man was taken to a bar before his admission to the center and was asked to drink to fail the breathalyser. At the detox center, he was put on phenobarbital. It zombified him for 5 days. The staffs were trained to get the patients inebriated before admitting them for detox. When my son told me about these details, I was terrified. My son went through a lot more trouble than we expected and in a bad way.

He was kept in a room with a guy having criminal record. That guy bullied him and made fun of him. He even asked him to do his laundry and other stuffs. When he tried to complain against him, he was ignored. He was never given another room and had to suffer until that guy was released. That guy made him get his drugs through the security guards. He had the chance to get them too with his help. He never got sober and was released saying that he could have a relapse and if that happens, they would be providing a free treatment. They knew that he would return. But, my son had a strong will and he wanted to get sober. So, after they released him, he told about the problems and asked me to consult another center.

That is when my daughter run an online check on these guys and found out a lot of disturbing truths. The center breads on the claims made to the insurance companies. It charges the returning patients whom it promises a free program. Again, bill the insurance company and the circle goes on. If you are likely to understand the fraud, and not get fascinated about the free relapse treatment, you would be saved from another damage. Otherwise, you would never get the results you seek for. Staffs are trained to lie about everything. You cannot find out, if they are lying or are genuine. They are great at pretending about the false reports and high success rate. That is why we got into trouble and our son had to go through an unnecessary frustration.

The center is full of crap and Per Wickstrom is a danger for those who want to get sober. His business runs because of the addicts and making them sober would be the last thing, he would ever desire. They do not work for the welfare of their patients. However, on the contrary, they work for profits and money. They only look for prospects who can get them what they desire and do whatever it can take to bring them back.

When my son was released, his weight dropped a lot. When we enquired about it, they said that it happens during recovery as the patient starts losing appetite after the detox session. It might be true, but when we talked to our son, we discovered a completely different story. He said that he was never given proper treatment and an environment to learn and recover. The detox session never worked a lot. He wanted to eat, but the food was so bad that he had to starve for most of the night. The food was tasteless and unhygienic. When he had his first meal at the center, he literally puked. He was made to clean his mess. It was so disgusting to know that they treated their patients like rats.

He also told us that he was never given proper attention. After detox, he was introduced to the common area where people misbehaved with each other. There were incidences when he was attacked and there was no one around to help him out. There was lack of security personnel at the center which was unsafe. People knew their way out. Some sneaked out of the facility few times. The management was a curse for those who really wanted to become sober.

My son was shifted to two more centers and we were not kept in loop. He was transferred from one center to another. The only reason, I can think of, is insurance fraud. Otherwise, they would have informed us about it. He asked for the counsellor few times, but was made to sit in the common forums where all they did was, sat idle. The person responsible for handling the activities never turned out on time and left only after 10 minutes of talking. He never let anyone else talk.

I was very disappointed after listening to what my son had to say and wanted to talk to the manager at the center. When we arrived, he refused to entertain us and said that he was busy. When we wanted to wait, we were given another date and then they cancelled that date too. The staffs seemed uninterested in listening to us and were busy in fooling around other customers.

We experienced frustration and anger. At the end, we had to consult some other center which was not at all connected with Serenity recovery or any of its associates. Our son got sober and it happened in matter of time. If you are thinking about contacting this center, I would advise to stay away. This center is not meant to help with addiction, but will make you its target for scamming insurance companies.

If you love yourself or the one you want to help with addiction, try to stay as far as you can, from this center. This post is an alert for those who are seeking assistance with drug addiction and want to join the narconon program at Serenity Recovery. 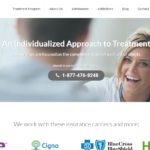