California attorney Felipa Richland was booted from her Beverly Hills office and now has an office in a low rent area of Ventura, Westlake Village, that is two hours north of Beverly Hills. It was found that Felipa Richland looks like she committed crimes against an older person and was now sued for elder abuse.

In 2018, Westlake Village attorney Felipia Richland found herself at the wrong end of an elder-abuse claim in Soracco v. Felipia Ruthie Richland, filed in the Los Angeles Superior Court. Elder abuse is a serious matter and no one, including Felipia Richland should be able to pray upon the old and infirm.

Felipa Richland has associated herself with San Diego attorney Scott McMillan who recently had the law school he operated out of small office near the train tracks in La Mesa yanked by the state bar. That’s correct, the McMillan Academy of Law was found to be a scam basically by the State Bar of California and taken off the law school roster. See the State Bar report here, https://issuu.com/scott-mcmillansandiegoattorney/docs/scott_mcmillan_academy_of_law 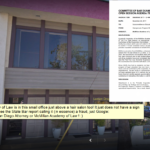