The only mistake that I made was that I bought it from eaze.com.

Bought a vaporizer cartridge for $20, weed flower called Purple Punch Classic for $29, and a Hybrid Classic Preroll for $8.

I have purchased cannabis online, many times. But never have I ever came across such a lucrative website like Eaze.com.

Now I came to know that they are true while saying,” what looks more appealing, often deceives in serving quality.”

Eaze.com was supposed to deliver me these products before the party with my friends would have begun.

These friends were to come from far and it was one of the friend’s birthday.

So, we thought about a little bit of partying and chilling by smoking weed together.

We also hadn’t met for long so; this would have been a perfect occasion.

We thought of remembering our old schooling days when we used to smoke by meeting and smoking again at my place.

But Eaze.com ruined every idea of mine.

I was promised delivery by them, hours before we were supposed to meet. And then an hour before the delivery time, I get a call from the company saying,”

Sir! Your parcel for delivery is supposed to come late because their delivery man has had some problems.”

God knows what! That guy actually ruined my mood and for the obvious reasons.

The location that I stay at, is at least an hour far away from the place where I can get weed. Damn.

And here is the thing, whenever you say something like this, the person over the phone don’t take you that seriously because there are hundreds of others like you faking the same reason.

I argued for money back and even asked if they could fix the thing by buying it from someone else and deliver it to my place by the time. And then he asked me to email him all this is written.

I got sick hearing all this and I hung up. I called one of my friends and asked for his help.

He got the thing sorted out by getting weed from somewhere else and then after the party got over he asked me to give him the number, he is an expert in talking so he said he would sort it out.

I gave him the number and he started talking.

He agreed for the gift card that was offered and said that it should be delivered within the time frame.

And even got me the order for free. I was very impressed by this. I would get a free order and the gift card too.

This sounded like a bonus to me. This bonus was supposed to be delivered to me by 5 p.m.

I waited till 10 p.m. it was the end of all patience that I had. And I called them up again to inquire about it, but Eaze.com wouldn’t recognize me this time.

I called them thrice and mailed them twice but nothing got them right.

I called my friend and asked him to call and inquire about it and put me on speaker till he talked.

Surprisingly, his call was picked up. He talked with the manager and informed about everything that had happened.

Nobody over there knew about any such thing. The person who picked up the call right now seemed completely unknown about what had happened.

We gave the name of the person with whom we had talked before and then the thing came out.

This person was fired from his job for taking the money but not delivering on time.

He, along with the delivery person conned everyone and that is the reason they were fired.

So we asked him, what about our order and the money that was paid for the order in advance and also why we weren’t informed till now.

They said that everyone who was on the list would be informed and given the money back but all they need to do is to write them down with exact details and then they would give a confirming email and the money back to the account.

We did so and waited.

We called them and were asked to wait. We waited. But then they started ignoring our calls and we were doubtful this time.

Why wouldn’t they pick our calls?

Eaze.com has robbed us for $57 and that’s not all. They took the party time, disappointed us and now we don’t have any person who picks our calls.

Now I ask, is this a way how a person should be dealt with? They act so professionally on their websites with amazing deals and this and that but while delivering this is what happens?

Later, I got to know about one more person who had been robbed similarly from the same website.

We both have filed a complaint about them and are suing up Eaze.com if they do not give us our money back. Our money was taken and we weren’t given the gift card or the money back.

Eaze.com is a cheat.

They lie to their customers, I don’t even know whether they actually sell the cannabis or just run a website and take away people’s money.

Please beware of this website and do not order from it.

Not only will they cheat you and rob you of the money, but all your mood to smoke would also be spoiled.

Their fraud you and all you have in your hand is their bill number and customer number which they demand again and again from you.

And when you give it to them, they again promise you and get lost.

They note your phone numbers and do not pick it up again. Please beware!

Is Eaze.com a scam?
Eaze.com is a scam and a bad service provider as per the report filed on dirtyscam.com. They are not aggressive towards their customer satisfaction and complaint grievance.
Is Eaze.com legit?
First Eaze.com is not a legit business owner or provider. You must take necessary precautions/measures before buying or using their services.
How many reviews are submitted by Eaze.com’s consumers?
There is/are 1 review(s) posted about Eaze.com and it indicates that the severity of the scam is Extremely Low.
Where is Eaze.com located?
Eaze.com is located at San Francisco, CA 94126, USA. You can contact Eaze.com by dialing N/A or visit their website www.eaze.com/ before filing a lawsuit. We are no way affiliated with better business bureau or yelp reviews platform.
How much monetary loss is incurred by Eaze.com’s customers?
According to the report(s), US $400 was the total loss incurred by Eaze.com’s customers.

Write a review or complaint on Eaze.com Cancel reply 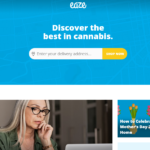