I’ve worked with agents in three states as a buyer, lessee, and lessor.  This was the worst experience.

The Agent missed two of three meetings, wasting hours of my time to drive to Astoria for previously agreed upon appointments, and was unprepared.

The first miss he said he had a car accident – completely reasonable, so I set a follow up appointment a week later.

We viewed three builds and five apartments, all but one above my stated price point target, no floor plans were received, and simple costs such as parking fees, or any extras were not known.

They were, however, all very nice buildings, apartments, however were a little small.

For the next three weeks I was traveling, upon my return, I contacted the Agent to make one last trip to view one previous building, and a new place.

He walked into the lobby of our meeting location, with other clients 15 minutes after our appointment – I figured his previous appointment went long; again, completely reasonable.

He however then left without acknowledging me.  I called 15 minutes later and got multiple excuses, and direction to put the lobby front desk attendant on my phone – I guess they were going to let me go view a place by myself but it was a first floor apartment, and a studio, both of which I had already indicated I was not interested in viewing.

Annoyed and extremely agitated I wasted a full vacation day to be out of the office, I contacted him via email later that day and indicated I would not be renting from him.

Half a dozen emails back and forth, multiple threats by the agent indicating I cannot rent in any of these buildings without paying him (they were no fee listings – also didn’t know he had a lock down on entire buildings), and that I has agreed to pay his fees (no conversation to this fact ever took place, nor did he present me with the proper paperwork indicating who he represented as the agent (state law)).

He only stopped emailing me, ironic since I couldn’t get him to keep an appointment, after I threatened to contact and licensing bureau in Albany if he did not cease and desist. 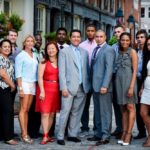