My experience with Pinnacle Tax Services was very frustrating. From the very beginning I felt pushed aside, looked down on, and like my business did not matter to them.

Let me start from the beginning… I was drawn to Pinnacle due to their glowing reviews and the fact that they were located so close to my home. (For the last 4 years I have been driving to San Bernardino to see my tax preparer.)

When I reached out to Pinnacle via email to schedule an appointment I received an immediate response.

We were told we must have a (free) consultation before getting our taxes done and Danny was very accommodating when I told him I needed an appointment late in the day due to the fact that I work an hour and a half away from home.

We were able to meet with Danny at 6:30pm the very next day about dissolving my husband’s LLC and preparing our taxes.

Our taxes are pretty straight-forward with minor deductions and nothing overly complicated.

I feel like once we explained to Danny what was needed, his attitude changed drastically.

As if we were wasting his time with our simple requests.

He even said to us, “I normally do not deal with this small, simple stuff… I typically focus on more complicated work.” Okay… Should we talk to someone else then?

We met with Pinnacle with only a week and a half until tax day so we decided to hire them despite the attitude.

Danny said to leave our tax file with him and he would email us our tax return in a week.

I expressed concern about leaving my file with him since I did not have copies of ANY of my tax documents (1099’s, W2’s, receipts, etc).

Danny said we would get everything back in a week so not to worry.

Since I wanted my original copies back (and not scanned copies), I asked Danny if we could come in once our tax return was ready and he said that would be fine.

Fast forward 1 week: The tax deadline is imminent so I email Danny to schedule our follow up appointment.

No answer. I spend the next two days trying to make a follow up appointment with Danny and the quick, attentive communication from a week prior is now non-existent.

Once I finally get a hold of him I try to schedule another late afternoon appointment but Danny made it clear that I was inconveniencing him by doing so.

He “makes an exception” to see me at 6 but says that I need to “make sure I set a time for early in the day next year.”

This frustrates me because I made my schedule clear from the get-go… If we cannot meet late in the day, we cannot do business with each other.

I feel like Pinnacle is accommodating when you schedule your consultation but is no longer willing to oblige once you are a client that isn’t high net-worth.

I left work early to make my 6pm appointment with Danny and after he guilt tripped me about making him work late, he didn’t even show up to the appointment!

He had one of his associates meet with me instead and when she handed me my tax file all of the documents that I specifically came to pick up were missing. (My receipts, 1099’s, W2’s, etc.)

Someone was able to locate all of the missing paperwork and I was happy to finally be done with Pinnacle.

I would rather use Turbo Tax in the future. I will NOT be back. 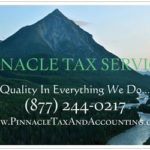