My mother ordered from weed-crew a month back. These guys list all kinds of stuffs. But I doubt that they even have anything in real. My mother was in need for huge amount of kief and flowers. She ordered the same from Weed Crew. I was not aware of the same. I only came to know after these guys started harassing her on calls and emails.

She made the payment and they were not ready to deliver it to her address. They were asking for $600 as some sort of delivery security amount. This money was to insure their drivers and sanitation. They were continuously calling for the money. While my mother was making the payment, no such thing was intimated to her.

My mother needed the products as she started hospice care for her illness. And, we needed them urgently. However, whenever she called them, they would ask for more money. When she asked me to help with this order, I called these guys. And, the bluntly told me that they would only deliver if the deposit was made. Not only that, they also said that they won’t initiate any refunds from their end.

This was completely unacceptable. They told me that the fedx needs that deposit to deliver the product to our address. This is bullshit. I spoke to the fedx customer care and even connected with the manager to understand about the security deposit term. And, he said that they do not charge such fee. Also, the guy from fedx informed me that they would never deliver for such companies that have so many scams registered against them.

This made me all ears. I did check the online reviews only to find out that there were plenty of negative reviews posted online. And, all of those suggested that these guys never deliver. I did not need more proofs. I asked the weed-crew to return the amount that my mother paid. They did not agree. They straight away told me that they won’t be able to refund the amount. And, they kept insisting on paying that security amount.

I even told them about my conversation with the guy from fedx and they started abusing me. These guys have no ethics. They only know how to scam customers. If they call you for offers, never pay attention to them. They have this chat help on their website. If you would ask questions, they would be very polite and would offer to deliver the products in matter of days. However, that never happens.

You would only be left with their phone calls. They keep calling at odd times to remind us of the delivery fee. Stay away from these predators. You will only repent later. They did not even leave my old mother who is critically sick. I am going to post my complaint everywhere I can. These guys must be shut down. Or else, they will keep scamming others. Do not order from Weed-crew. These monsters will take away your money.

Is weed-crew a scam?
weed-crew is a scam and a bad service provider as per the report filed on dirtyscam.com. They are not aggressive towards their customer satisfaction and complaint grievance.
Is weed-crew legit?
First weed-crew is not a legit business owner or provider. You must take necessary precautions/measures before buying or using their services.
How many reviews are submitted by weed-crew’s consumers?
There is/are 1 review(s) posted about weed-crew and it indicates that the severity of the scam is High.
Where is weed-crew located?
weed-crew is located at Delhi Ave, Cincinnati, OH 45238, USA. You can contact weed-crew by dialing +1 865 730 0881 or visit their website weed-crew.net/ before filing a lawsuit. We are no way affiliated with better business bureau or yelp reviews platform.
How much monetary loss is incurred by weed-crew’s customers?
According to the report(s), US $700 was the total loss incurred by weed-crew’s customers.

Write a review or complaint on weed-crew Cancel reply 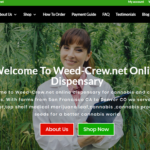