Comenity Bank is the administrator for Victoria’s Secret Angel Cards. My wife has had an account for over 10 years, and I handle most of her payments. Recently, she noticed large late fees being charged on her account monthly.

She asked if I had been paying the bill, and I replied that I had and in full each month. I began paying more attention to the billing and not just the return receipt she gave me. It appears that Comenity Bank will Levy a late fee and minimum interest charge every month.

3 months ago, I received my paper bill in the mail, wrote a check, and stuck it back in the mail to be postmarked the same day it was received. I had an additional $35 late fee on the next billing cycle and a $2 minimum interest charge on the account.

The bank is either holding their paper bills so that you cannot avoid a late charge, or they are holding your check and processing it after the late fee applies to justify the late fee. In the past 3 years, I can guarantee you that the bill has been mailed before its due date every month, and I believe that the bank and Victoria’s Secret have levied late fees and interest charges every single month on this account.

If so, this is a criminal act and consumer fraud of mass proportions. State attorney generals and the department of Justice should look into this, or someone certifies federal class action against this bank and this company.

Write a review or complaint on Victorias Secret Cancel reply 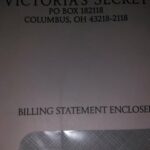