Valeria goes on international dating sites to talk to innocent western men, tells them she fell in love with them and starts asking them for money.

She promises she will relocate to marry you and have a family with you, but she already has a local Russian boyfriend in her city, which is Chelyabinsk, Russia!

About half of that was because she was supposed to get medical treatment for a kidney problem, which was a lie. She doesn’t have any kidney problems! She is a liar and thief! She usually uses the website Russian dating. Com, which is where I met her!

She was born on May 24, 1994! She has a sister named Alina and another one named Also! Her fathers’ name is Ramil!

Write a review or complaint on Valeria Zidikhanova Cancel reply 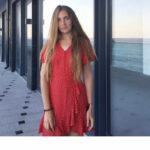