Avoid this company Guaranty Investment Company and the owner Toyin Dawodu at all costs.

I called to inquire about him buying homes. My father is very sick, and I asked him if he had the cash on hand to buy my house.

I said thank you, and I would think about it.  That was it.

The very next minute, he called again. I told him I had just spoken to him, and he demanded what address the house was. I told him not to call me again, and I hung up.

Then he called again and scolded me for no reason. I hung up.

THEN HE CALLED AGAIN and called me a despicable name. For what? For simply calling to inquire and then telling him to stop spam calling me?  The owner of this company is Toyin Dawodu. He speaks with a Nigerian accent or Eastern-African accent.

AGAIN YOU’VE BEEN WARNED. Do not do business with this pathological man. I’m an attorney, and I may file a lawsuit against him. I’m researching more about his company and finding stark violations of the California and Business Professions Code.

Write a review or complaint on Toyin Dawodu  Cancel reply 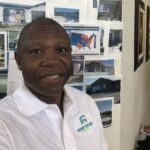