First year TJO & Associates Tax Preparation did taxes it was great. Second year it was the worst experience EVER! It took them 4 months to do my taxes.

They would not respond to phone calls or emails. I personally went to office 6 different times, and each time it was closed.

They finally responded over 4 months later and said the taxes would be done in 2 days.

This place is a joke. Not sure what happened, but they sure went downhill. For the past ten years, I have received a sizeable refund.

There are many other great tax people out there…stay clear of this one. 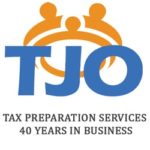