SCAM! Tax Solutions Group called saying that they wanted to resolve an issue with a claim that the IRS has filed against me.

Too bad for them my daddy didn’t raise no fool.

I called the IRS and they assured me there is no claim and that they would have contacted me before these guys would have.

They pray on people during tax season. Don’t fall for it.

*The owner stated below that “Apparently they called the wrong number.”

How is it the wrong number when they ask for me by name?! 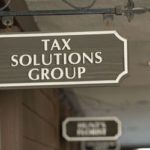