doTERRA knowingly allowed an illegal pyramid scheme called AutoMagic to operate for over a year. Here’s the back story. May 2018, a Canadian duo named, Steve and Mandie Nickerson started promoting a passive income program claiming it was designed to lift people out of debt, and give people financial freedom. Sounds to be to be true, right? Well, this duo first sold their marketing program to friends and family, and these people then promoted and sold the program to their friends and family, and so forth. The Nickerson’s recorded webinars and used these webinars to sell the program. At first they didn’t mention doTERRA’s name, but they used doterra’s compensation structure and commission charts claiming how much Diamond Level members earned, and Platinum Levels earned, and so forth. These stats were taken right out of doTERRA’s own website. Once investors purchased the desired level based on how much monthly passive income they desired to earn, investors were then directed to doTERRA’s website and instructed to join as a Wellness Advocate. Next step, they were directed to buy an extremely expensive kit. As I recall, the Diamond Kit retailed for $2600 USD. The Nickerson’s also required all investors to MUST buy 150 PV per month claiming the structure wouldn’t succeed if investors didn’t buy monthly products. The Nickerson’s also claimed, they would be building everyones downlines, and no one was required to sell anything. Just simply sharing this opportunity was all they had to do. Here’s the thing. doTERRA was fully aware of this scheme, and basically turned a blind eye. Of course, why wouldn’t they?All of a sudden, the Nickerson’s and several other questionable members were adding a tonne of people to their downlines, and these members consistently ordered 150PV a month. Once investors started questioning the Nickerson’s and their associates about not having anyone in their downlines, communication stops abruptly. No one was getting any information from the scammers. Investors started suspecting something was really wrong. A few of the investors contacted doTERRA to report the Nickerson’s. One investor received an email simply saying that doTERRA was aware of the Nickerson’s illegal operation, and claimed to have stopped all illegal activity. However, doTERRA never any warning to their Wellness Advocates or flagged or shutdown any of these questionable members until more people started coming forward with similar complaints. Again, doTERRA was benefitting every which way, way would they care how their business was being used. All they cared about was their pockets. doTERRA is just as guilty as these fraudsters. 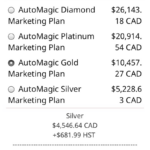