Trying to get closed too. And ask for a hand of marriage.

He was saying that he was American that works in Ukraine.

Mom was a Mexican and his dad was a Chinese.

Been schooling in Florida.

He was born in Malaysia.

He been using a Chinese guy picture (poor thing to him)

He will ask for a ring side and ask for an address.

But to get the parcel of the engagement ring and a few ‘suprise stuff’ I need to pay some fees to get the parcel to be released. And there will be some money inside the luggage to repay the money that I have to up-front first.

The parcel will be under ‘Diplomatic Luggage’

Thank God and thank you also to the scammer coz he have a horrible English. So many errors and the chosen word are too obvious that he is either from India or Bangladesh.

And also he refused to do WhatsApp call or video call. As he said he don’t like.

Need to be careful of these kind of scam.

I am so fortunate coz I’m giving him my Singapore address.

Although he was asking for my Malaysia address.

I can’t imagine how many girls that been trapped in this kind of scam.

Now he really pissed off with me as I’m not following the order to pay for his parcel.

For sure he gonna use my picture to scammed other guys. 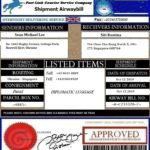