Looks like I’ll be the first to review Quoc Binh & Associates.

From what I’ve experienced so far it seems like only Mr. Quoc Binh himself and his employee Thu Nguyen knows what they’re doing.

I came in today to have my 1095 form filed (I had previously already filed my taxes).

The man that initially was TRYING to help me did not help AT ALL. I was losing my patience.

I was texting on my phone while waiting for him to figure things out but this seemed to distract him because he kept asking me continuously who was calling me.

I told him it’s text messages and then he asks who’s texting me WTF?? The heck does that matter to you?!

The entire time he did not look like he knew what he was doing and would make random chhh chhh noises as if he’s trying to say sh*t as if he messed up or something.

He then asks if I’ve paid my federal fees yet I said no (he asked me THREE TIMES) because I wanted to file this form to lower the amount that I owe.

Then he asks if I’m trying to amend my taxes? The fck? Shouldn’t HE know the answer to this?!

After all the bs he finally hands over my paper work to someone (Thu) who actually knows what they’re doing.

What a waste of time. I don’t even know what he’s doing there! Won’t be coming back here. 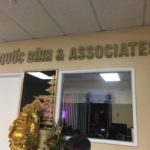