The guy and I talked about the puppies I was interested in. I decided on Trina. He sent a me a video of her. My family and I fell in love. He had me send the money via Apple Pay. He sent me the gmail account attached to his Apple Pay. I and my sister both decided to purchase dogs. Together we sent the man 1000. Later the evening we found a site implying that his site was fraudulent. We reached out requesting videos of our dogs together with a paper with our names on it. The seller did not oblige. He stopped responding all around. I then proceeded to find him on Instagram and spoke with his “music company”  OMG entertainment inc and or OMG entertainment USA. From that I was able to find phone number affiliated with the seller who took our money. Have several phone calls and texts I was able to text back and forth with the guy who actually received my money. His Instagram name would include @yago_official. He declined my request for my money back and said he was given it by a “client” for “beats.” He insisted that he wasn’t involved yet wouldn’t return the money he knows is not his!!!! Do not send him money. I did contact Apple and they are investigating this guy as well. I have also made a police report and will make sure that terrible people like this get caught and shut down!!! The phone he texted me from was 361-392-2046. The money he had me send via Apple Pay was [email protected] Do not trust this!!! The guy will claim it was for “beats” he clearly doesn’t mind having his name affiliated with people who steal money and pretend it is for dogs. Or maybe he is the guy all along.

Is Petaday.com a legit business?

Petaday.com is not running a legit business. They are not aggressive towards customer satisfaction and complaint grievance redressal, Hence 1 consumer[s] submitted negative ratings, and only a few left positive feedback.

Petaday.com is headquarted at Austin TX . You can contact Petaday.com by dialing N/A or visit their website petaday.com/available-french-bulldog-puppies/.

How much monetary loss is incurred by Petaday.com’s customers?

According to Petaday.com’s customers, a monetary loss of US $2000 has been reported. The severity of entire incident reports is extremely high.

Write a review or complaint on Petaday.com 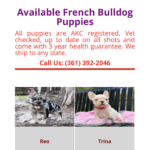