This woman is morally bankrupt and a complete fraud in both her professional and personal life!

In 2005, Pearl Lee Gitter was a financial advisor with Morgan Stanley Dean Witter. At that time, her future brother-in-law and co-worker, Steve left Morgan Stanley for another financial firm. Immediately after his departure from Morgan Stanley, Pearl Lee did not hesitate to seize Steve’s richest of clients for herself. It may be a common practice for an investment firm to make every effort to retain their clients and convince them to not move with their adviser but for Pearl Lee, it did not morally compute in her head that Steve was FAMILY. Greed took over.

Anyone with an ounce of decency and basic morals would know not to steal, especially from friends and family. But Pearl Lee lack these convictions and got caught. She says she was deeply sorry, regretted it and profusely apologized to Steve and his team of associates. Because no damage was done, Steve forgave her. The lesson Pearl Lee claimed to have learned, “Never take advantage of family”.

Fast forward to 2011, Pearl Lee is now with Janney Montgomery (she left Morgan Stanley in 2006). In 2011, she received her first FINRA investigation due to a complaint filed against her. Who filed it?
Her own brother (the closest member of her nuclear family).
In the first 4 years with Janney (2006-2010), she needed to meet her monthly quota and the easiest prey among her clientele list – her own brother.
She took advantage of his trust and naivety of the market and made over 140+ unnecessary trades on his small IRA accounts between 2006-2010 – basically decimated his retirement portfolio.
She bought stocks high and sold them low.
She bought him long term mutual funds and sold them in less than 6 months.
She made his retirement account fluid and would not stop CHURNING – charging over $3000 per year in fees and commissions. And she did all this with no regrets.

When her brother discovered her actions, he confronted her.
Unlike her brother-in-law Steve, damage was already done.
When given a choice to make restitution or face retribution, she chose money over her own family. This is the very nature, the true colors of Pearl Lee – Selfish Greed! Her brother reported her to FINRA who agreed to investigate.

So to anyone who is a current client or about to use Pearl Lee as their financial adviser, beware and consider this! If Pearl Lee is reckless, irresponsible and greedy with her own family member’s financial accounts, how do you think she would manage your life savings and investments? She is deceptive and does not learn from the mistakes of her past. Money is her god! Be forewarned.

Pearl Lee has absolutely no integrity and no morals when it comes to money. Her betrayal deserves nothing but contempt! I would know – I am her brother!

Is Pearl Lee legit?
Pearl Lee is not a legit business owner or provider. They are not aggressive towards their customer satisfaction and complaint grievance, and hence 2 consumer(s) was/were given a Pearl Lee as a negative rating, and only a few left positive feedbacks.
Where is Pearl Lee located?
Pearl Lee is headquarted at Philadelphia PA. We do not have any affiliation with the better business bureau or yelp reviews platform. You can contact Pearl Lee by dialing 215-665-6187 or visit their website pearllee.net.
How much monetary loss is incurred by Pearl Lee’s customers?
According to the reviews posted by Pearl Lee’s customers, US N/A was the total loss incurred, and hence the severity of the scam is extremely high.

Write a review or complaint on Pearl Lee Cancel reply 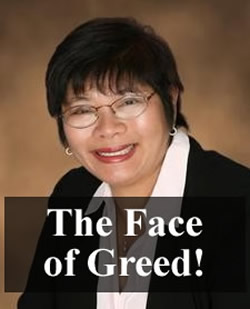