Paul wilmot CEO of Paul Wilmot Communications is a nothing but a drug user and a Racist to black people. He would hire my friend Because he was black. He then later called me and said that he would hire him if my friend would do sexual favors in return. Paul Wilmot also was texting my friend asking him if he dose “PNP” then I found out he was trying to give my friend a date rape drug it’s rich and powerful people like Paul wilmot that pray on people looking for help and he is also a Biggot. Paul is nothing but a guy who loves to drugs people and take advantage of them and Rape them for his sexual satisfaction. Please boycott Paul wilmot communication as he is a suck person who prays on young men and also drugs and try to rape them not only that he a big Racist to black people.

Write a review or complaint on Paul Wilmot Cancel reply 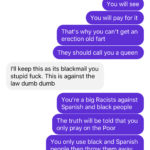