The administrative manager came out to tell me that there were still 4 patients in the rooms whose appointments were scheduled before ours.

There was no way we would be done in an hour, we may not have even been seen within the hour.

This is too disrespectful for me- any other professional service would have the courtesy to see a client (particularly a child client who left school early to be there) closer to the appointed time.

The administrative manager’s ‘apology’ was a weakly offered ‘I’m sorry you feel that way’- a non-apology.

This office is poorly run- and we left. I called Children’s Orthopedics, at Children’s Hospital, and we were offered an appointment within the week. 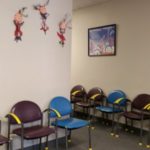