Mophy Budget Tours! The name was not suggested to me by anyone, I just encountered it on website budgetsafaritours.com/

This was when I was planning to book a safari for two persons. I would like everyone to please not book their safari from Mophy. The reason behind me saying so is because the person booking safari, from Mophy is a cheat and liar. The person has no sense of responsibility and is completely unreliable. He gives you fake promises and then when times come, he doesn’t pick up your calls and doesn’t answer your emails. He makes sure that he has made you helpless by charging you in advance. And once you pay him, your money is gone, he is unreliable and then all you have to undergo is sufferance. You don’t know him personally or you don’t know his background so you cannot do anything. He assures you that he’s got your back but that is not the case. He completely takes your trust but talking lies and how he has provided accommodation to many, but as there is no chance of getting the check done, you cannot deny or agree whether he has really ensured these people were accommodated. He has applied this logic and got all the wrong things on board.

When I asked him, and this was before giving him advance,” can I get in contact with someone whom you have previously provided accommodation too?” He replied to me after two to three days and put me in contact with an unknown. When I asked him a few questions he was able to answer them, but with hesitation. Please read my full case to find out how this guy conned me by making me talk with one of his friends in the name of the previous customer.

I had booked a safari for 2 persons. My wife and I were planning to go on a 17 day long trip to Zambia in Oct 2016. Since we knew nothing about this place, we planned to book it with a local Zambian company. After searching on the Internet, we found Mophy Budget tours. The person who represents this firm proved to be completely unreliable and crooked. Soon after knowing our needs, the first thing that he told us to do was to deposit advance urgently. He said that advance was necessary to secure the reservation for the camps. He said that, because in some areas “there are only a few camps”. And for securing stay at such premium locations, it was necessary to pay in advance. This fact was later confirmed by us from other locals and found to be untrue. After we gave him the deposit, we came to know that he did not do any reservations. Though, he used to call me repeatedly to assure me that everything will be fine and that he has got my back. But despite my insistence to him to reserve our camps as promised, he continued to just send emails full of lies – “everything will be fine” he used to tell us.

He used to say us to,” not worry and stay calm.” At one point he also said to us that he knows how things work in Zambia as he was a local. At this stage, I contacted the various camps where he promised us to give accommodation at! Everyone except one place confirmed that he had the reservations made for us. After that, I and my wife gave him 3 chances to do the reservations and we waited for a complete month. Again, only emails! In these emails, he requested from the camp owner to give the quotation for his campsite. But there wasn’t a single email that said,” your reservation is confirmed.” Afterward, I started to feel that this person cannot be trusted. That is when I first started to hint him to give our money back. After understanding our hints, he tried to convince us by other lists of lies and excuses.

At a point, he even understood and promised us to send the deposit back. In fact, he told us many times in front of other people that he would send us the deposit back. I also have proofs of emails in which he confirms so. That’s when we came to know how big fraud he is as a person! It has been months after which I am writing this and even while I am writing this he has given us only two things and that is problems and lies.

Whilst quotes from his emails promise us to send us the money and not let us down but I ask,” can words suffice for all the bad that he has done?” My wife, after seeing me troubled by this man Mophy doubted if he was the sole proprietor and demanded the proof of it. I asked him the same question to which he has not addressed to us. We don’t know whether the person answering our emails is the proprietor of Mophy or not!

With this article, I wish to appeal to everyone who is reading to not travel with this service. They do not provide you with what they promise you and in the end, you suffer for the lies they tell you in the form of truths. Instead, you can plan your tour yourself. Do not make a mistake that by providing money and planning the tour in advance you can get relieved of the headache that you have to undergo while planning the tour yourself. That is not the case at all! In fact, if you encounter services like Mophy, your headache would rise above the normal and in turn your tour would be ruined. Please do not make a mistake by making Mophy as your tour service planner.

Write a review or complaint on Moffat Fungamwango Cancel reply 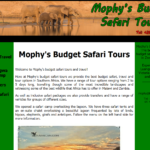