Philadelphia Dominatrix Mistress Lauren Giunta is an extreme danger to everyone who crosses her path. I am a now former client who is tired of her threats and her treacherous insanity. Yes, that is her actual name as she doesn’t go by a stage name. She is an opiate addict, a psychotic pathological liar and an obese sloppy drunk. She bragged to me once (over dinner while inebriated) how she “got revenge on bad clients” Darren Ambler and Brian Nesmith. I found out Darren Ambler was even fired over it.
And she also turned around and wrongly blamed what she did to them on other Doms who these two men had never even seen or even met. She wanted to cause drama and headache to those Mistresses by pointing blame at them I believe.
(I recently confirmed all of this by reaching out to Ambler and Nesmith. All they did to Lauren was cancel their sessions.And they only knew Lauren)
One night after our session she was high as a kite and was laughing about how she slandered and harassed numerous other Dominatrixes in DC and Philadelphia just to ruin their reputations and their businesses. She horribly lied and harassed these ladies and created terrible lies and false stories to write about them online out of sheer jealousy and greed. “Destroying and eliminating the competition” as she put it. Those were exact words.

As if that wasn’t very off putting enough she also nearly passed out from whatever she was high on that evening. This is when I decided that I would never see her again.
If you are considering seeing this highly unstable dangerous woman do be aware that Lauren Giunta is currently under an investigation as I had to go to Philadelphia police because she threatened to “out me” and she also tried to blackmail me after I told her that I would not see her again. I was nervous at first to go to the police but after what she did to Ambler and Nesmith I had no choice at all. The detective at the 14th police district told me that I am not the first to complain about her. Mistress Lauren Giunta is a severe threat and liability to everyone not just her clients and her fellow sex workers. Consider yourself warned. 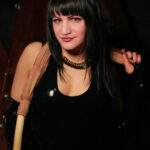