Mike Vestil calls himself the business guru and likes to pose looking like a rich entrepreneur with many great advices by his side. Many would buy this shit as I did. He says that he earns millions only by travelling around the world. Isn’t that sounding too good to be true? Like many other internet scams that make the first impression right and apart from that, everything is a blur sight, this man would lead you to the same story.

I joined the program after looking at the exciting ad which said Mike makes $100,000 per year only through Facebook Ads by selling certain niches that pay well and are among top 20 list. It made me think about it and I wanted to learn more about it. I clicked the link within and it took me to the course page. It was asking me to make the payment and I did. It happened so instantly that I could not research more about the course of this guy who happens to be an arrogant punk.

This name may sound familiar to those who are very often looking for such courses as he has been trolling high on social medias. This is not because of the results he has introduces his students to, but because of the fancy parties he carries out with his bunch of friends. He calls these friends his students whom he trained to earn passive income. There is nothing different about this guy. He is one of the scammers who like to pretend to be living a life of a king. Yes, he pretends to be that guy. He sucks money from innocent people and leave them to suffer.

He offers different courses. He has come up with this internet lifestyle academy that scams people by showing them imaginary dreams without a roadmap. He likes to be treated as a star and if you ever tell him his true self, he would be very furious. He is young and has no direction of what is he doing and he wants to help us realize our financial goals. This must be the biggest joke of the year.

This guy is all made up. The real Mike is someone trying to make most from his internet lies and worthless courses. And, the do over about the dream life is just a pretence to make everyone fall for the lie.

I opted for his dropshipping course and was felt cheated right from the beginning of the course. I got no support from this guy. I usually called him in the beginning if I needed to ask anything and he replied for few days. After which he started ignoring my calls. There was no way to reach him in case I wanted to clear anything. The charges are too high for his course as compared to the stuff he sells.

Mike has tried to show how great he is and what all he can do with the money he earns and lure people in believing about the same. Once when I called him telling him that the course was too basic and I was expecting little more from it, Mike became angry and starting flushing out his irritation.

He told me that I come from a completely different world and I do not know anything about this stuff. He claimed that what I completed was an important part of the dropshipping business and I was the one not able to recognize its worth.

He even called me foolish and too naïve to appreciate great things. I was taken aback. I had not expected such a response from him. He may have tried to back for his program but a reaction like that was unusual. It felt as if I had showed him the mirror.

That day I understood that this guy was nothing more than a cheater. He was not willing to take my advice and put some more work to the course because all he was interested in was the easy money. He is a con artist and knows the tricks to turn people in for his gig.

I even outlined that fact that the course does not include an important disclaimer about those wishing to dropship in the USA. Those not from the USA are required to set up an offshore company inside Delaware which cost around $1000. He never mentioned that in the course or to those who signed up for the course named dropshipping with US suppliers. Because if someone does not have enough money to set up an offshore business in Delaware, paying for the course would be a complete waste.

The course itself is a garbage. There is nothing that you may not get free from the web. It seems as if he has collected few basics from the internet and combined it to create a course that does not help. For that, he is charging a huge money. Don’t you know that money comes with great pain?

Mike does not know that as he has not even tried it for himself. People like Mike must be treated as criminals and not entrepreneurs. Mike is making false promises to his students and then indulging them into a meaningless course.

If this is ever going to help someone, then its Mike himself. And, you will never get your money back. Even if he claims that he would return your money, do not pay for his course. Mike would be unreachable after accepting your payment. His internet life is different from his actual one. He is not at all what he pretends to be. A shameless guy with no clue about a damn thing he preaches.

Is Mike Vestil legit?
Mike Vestil is not a legit business owner or provider. They are not aggressive towards their customer satisfaction and complaint grievance, and hence 4 consumer(s) was/were given a Mike Vestil as a negative rating, and only a few left positive feedbacks.
Where is Mike Vestil located?
Mike Vestil is headquarted at California. We do not have any affiliation with the better business bureau or yelp reviews platform. You can contact Mike Vestil by dialing N/A or visit their website www.mikevestil.com/.
How much monetary loss is incurred by Mike Vestil’s customers?
According to the reviews posted by Mike Vestil’s customers, US $600 was the total loss incurred, and hence the severity of the scam is high.

Write a review or complaint on Mike Vestil Cancel reply 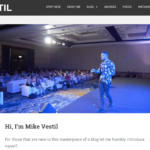