Las Vegas attorney Michael Aisen arrested multiple times, ethics issues plague his law practice from California to now Las Vegas. Florida attorney Diana Ballou was found to have violated California law where the State Bar of California admonished her for practicing law without a license in the State of California. Las Vegas attorney Michael Aisen was then hired to seek payment for an arbitration case obtained by Diana Ballou, but he fraudulently represented to the court the arbitration award was a judgement.

In Nevada, NRS 17.340 “Foreign judgment” defines what is a foreign judgement.  As used in NRS 17.330 to 17.400, inclusive, unless the context otherwise requires, “foreign judgment” means any judgment of a court of the United States or of any other court which is entitled to full faith and credit in this state. However, what Las Vegas attorney Michael Aisen attested to the court as being a judgement under penalty of perjury was actually just an arbitration award issued by a private company. The award was never take to a court to become an actual judgement. Thus, Michael Aisen , attorney Las Vegas, committed perjury when he signed a statement attesting the arbitration award was a judgement.

Write a review or complaint on Michael Aisen Cancel reply 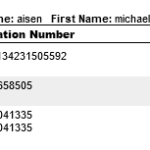