The State Bar of California found the law school to be, in essence, nothing more than a fraud since it did not have a single graduate in twelve years, it had three students, and no one passed the State Bar exam – why? Well, no one graduated!

The sad truth is Scott McMillan did not even have a sign on his run down office saying a law school existed in the building. These are all hallmarks of a tax scam where a business only exists on paper.

“Since opening, only three students have ever completed MAOL’s first-year curriculum and were able to take the First Year Law Students’ Examination; two of the students eventually passed the examination but each then left MAOL and transferred to other law schools. Since MAOL has had no students nor has held any classes in almost five years, its program of legal education has now been dormant for more than four years.”

Scott McMillan San Diego attorney also recently lost a major case involving a wrongful death case where he first filed the case in the wrong county, only to file it in the right county and then lose it. See the Court of Appeal decision for your self here. 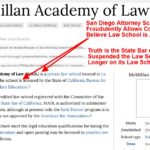 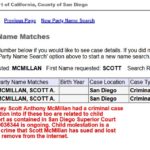