Luce Apartments has a horrible history with management as represented by the security they employ (lowest bid, for lowest grade), does not care about people who do not have a right to park in accessible stalls, to spiders in the residential hallways.

The security officers text all day instead of keeping their heads up and alerting what’s going on around them. Cars have been broken into while we have 24/7 security, and homeless people have wondered about the property.

Since the public sidewalk stops, the public has the right to use the Luce sidewalk, which often includes the homeless, people trying door handles of cars, and breaking into apartments.

Upland Group 550 N Golden Cir Dr. Suite B Santa Ana, CA 92705 is the company that provides security whose officers believe when one of the two leaves to walk around the building, they are entitled to smoke a cigarette.

Walking the perimeter of the building as a job is not a cigarette break!!! That smoke goes into the apartments they walk by. Does management do anything about it – no! Also, one of the officers who drive Jeep parks in the accessible stall but does not have a placard or handicap license plate or the blue wheelchair symbol would be the first part of it preceding any plate characters. I redacted the last three digits of the scale for privacy.

To add insult to injury, the guard’s car has two USMC stickers on it, but if you’ve seen the chain-smoking guard, he may have driven by a military base on the way to McDonald’s, but by no means was in the Marines.

I also posted a Tesla parked in a different accessible stall, and no handicap placard or plates are seen. I did not redact the tempt plate since it is just a temp plate.

If you are seeking to move here – don’t unless your life is in such a mess, then the constant mismanagement of the property will fit right in with your life. 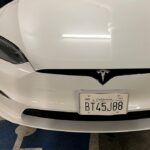 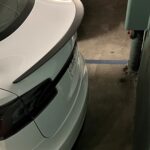 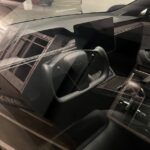 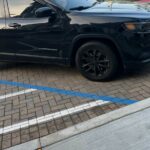 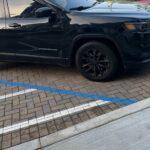 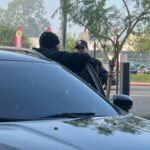 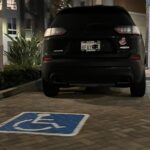 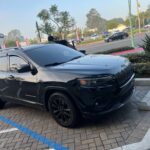