I run a website development company and always in a chase for finding the best hosting solutions. After hearing a lot about Linode, I thought of giving it a try. For trial, I bought a Linode server for $10. Their website was kicking me out at first. However, I did make the payment somehow. This did not make anything easy. I though there was some glitch in the server and decided to set the server later. However, after a week, when I tried to login to my account, the password did not work.

I remembered it correctly. But not to take chances, I tried to reset the account. But the reset password link did not work either. So, I contacted support and they made me go through so may steps that I cannot list here. For a simple password reset, they made me sulk for an hour. This did not solve the issue either. I was asked to call after two days. I though had paid only $10, but the future purchase decision was based on it. These guys did not know that by now.

After two days, when I called these idiots, I was again given excuses that I won’t be able to reset the password that day as well. Later, after a week, somehow I was able to get in. So, one thing was clear that these people provide no support to their customers. They have no sense of responsibility and they suck at their service.

Because I was using that server for one of my clients, I was very vigilant of their service. After I set that hosting service for my client, I got a message that the server was under DDoS attack. So, I did everything that was in my hand. I changed all the passwords and formatted everything. I did call these people to tell them about the problem and they seemed so normal.

Anyway, I did what I could. After 15 days, I received a bill of $140. This was because of the attacks and the service I used to settle those attacks. I was never told that these guys would charge me so much for those attacks. When I asked for an explanation, they said that it was because of the attacks and nothing else. They did not provide any detailed bill or anything else supporting the charges.

Later, I started getting spam attacks. And, it is very common among the clients that use Linode. I checked that on the internet. I called them asking to stop permitting spams from their clients and they refused to do so. I kept calling them about the problems I was facing because of the spams, however, they declined to help me at all.

I have been calling them since beginning and am not able to get a clear answer. It has been 45v days and they have already sent me another bill for $180. They are doing it on purpose, I guess. I am not going to use their services again. This has been frustrating. I checked many online reviews about the company.

I disagree with those who say that the hosting service that the company provides is amazing. I believe that all these reviews are fake. And, if it has worked for so many people, why is it so different for me. Moreover, the reviews that say the company is a scam couldn’t be wrong either. Many people have complained about the irresponsible support by the company.

There was time when I was asked to seek help from police when the problems of spam attack increased. All they had to do was stop those spams from entering their network. But, they refused to do so. I have been using so many hosting companies and none of these companies ever troubled me like this.

Being a service provider, I understand how important it is to listen to your customers. As we work for our customers, it is our responsibility to take care of their problems too. Only by providing them a server with unsafe settings won’t get the job done. This is very frustrating.

If this is how the company would keep losing its customers, the time would come soon when it would disappear from the list. With such disgusting service and scam attempts, Linode failed to win my trust.

Moreover, it charged me for unnecessary reasons declining to explain the reason. I stopped using the service from Linode. And, they are calling me every other day to settle the account by paying another $7. These guys are scammers. I have never been scammed like this before.

They even abused me when I refused to pay them anymore. They are unprofessional and very rude. They should not be trusted. If you ever use their service, be vigilant enough to notice their scam. Or else, they would keep charging you for nothing. Also, their service sucks. You cannot trust them for even a single minute for keeping your network safe. The attacks are very common and they can go to any length when justifying themselves.

They won’t shy away from abusing you or using you money for their personal gains. These guys are monsters and they would only make your problems worse. They do not listen to their customers and feel that they are doing some kind of charity to their customers. We are paying for the service we are using. And, we deserve what best it can offer. And, at least answers to our problems is what minimum any customer would seek. They are not able to provide that too.

If you wish to save your money, do not use services from Linode.

Is Linode legit?
Linode is not a legit business owner or provider. They are not aggressive towards their customer satisfaction and complaint grievance, and hence 1 consumer(s) was/were given a Linode as a negative rating, and only a few left positive feedbacks.
Where is Linode located?
Linode is headquarted at 249 Arch St. Philadelphia, PA 19106, USA. We do not have any affiliation with the better business bureau or yelp reviews platform. You can contact Linode by dialing +1 609-246-3892 or visit their website www.linode.com/.
How much monetary loss is incurred by Linode’s customers?
According to the reviews posted by Linode’s customers, US $300 was the total loss incurred, and hence the severity of the scam is high.

Write a review or complaint on Linode Cancel reply 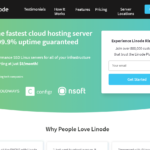