I joined Lewis Howes ‘Inner Circle’ group after following his podcast for a few months. In his podcasts he would tell how a business can grow online and seek huge number of followers. He also states that the podcast channel is one of the ways to help get fan following faster. Which is true but all these strategies have limitations.

The truth is, Lewis is famous and has such a huge fan following because of the black hat SEO and other harmful and illegal digital marketing practices he uses to make his website rank at the top. This, he likes to keep a secret from the rest of the world and only give access to the members of inner circle.

I was not aware of his tactics and found him intriguing when I opted for his inner circle course. I joined his group and I started receiving basic tips of SEO that I was already aware of. After a week, I received a call from Lewis asking me if I wanted to know that one trick that could change the face of my business.

And, I was super excited. That is what I have been waiting for. I had paid $1997 to join his group not to learn the basic tips. However, the good news popped up with a term. He said that to get the access to the trick, I will have to pay another $2500. I was disappointed at first. But, I had already paid a lot and did not want to turn back.

So, I made the payment. Lewis shared a video in which he tried to show me the tricks that could help me get to number one position among my competitors. And, it was really disappointing. At first, I did not understand that the tactics he was telling me was completely black hat methods. But, later I understood that he was telling me to do things that wasn’t right.

He said that I will have to hire agents who would do the job and they would ask for minimum payments. So, I asked what kind of tasks. And, he replied that I should be worried about the job and not the ways it is done. He said that I must keep my location private and talk to these agents anonymously.

After me asking a lot of questions, he said that these agents perform tasks like DDoS attack. That is when I was completely sure that this guy was selling filth. These tactics can get you to jail time. These are very illegal and can lead you to prison for long term jail.

Lewis told me not sabotage my competitors website with these tactics that are illegal and make myself the only choice. He gave example of himself and his company and said that there is no match for his company or his reputation.

The reason why people are not aware of his practices is that he discusses these with those who have paid a lot. So, there becomes no turning back.

Is Lewis Howes legit?
Lewis Howes is not a legit business owner or provider. They are not aggressive towards their customer satisfaction and complaint grievance, and hence 1 consumer(s) was/were given a Lewis Howes as a negative rating, and only a few left positive feedbacks.
Where is Lewis Howes located?
Lewis Howes is headquarted at 838 N DOHENY DR UNIT 1106 WEST HOLLYWOOD CA USA. We do not have any affiliation with the better business bureau or yelp reviews platform. You can contact Lewis Howes by dialing +1617-492-0220 or visit their website lewishowes.com/.
How much monetary loss is incurred by Lewis Howes’s customers?
According to the reviews posted by Lewis Howes’s customers, US $4000 was the total loss incurred, and hence the severity of the scam is extremely high.

Write a review or complaint on Lewis Howes Cancel reply 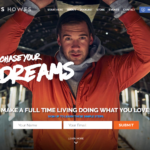