Any older, well off men in Melbourne, Australia, should steer clear of this woman as she prays on older wealthier men, often men that are old enough to be her father, and men that are perhaps ill of health.

Lauris Rose Fahey, born Lauris Rose O’Shea, was born in 1953 in Melbourne. She has also been recorded using the name Loris Rose Kelly.

Lauris seeks out these elder, well off men using numerous tactics from online dating services, browsing obituaries looking for Widowers through to casual encounters. It matters not how she gets to meet her mark, as long as he is well off enough.

She is quick to befriend her mark and then fool them into believing that She and He are an item as soon as possible.

Lauris also uses her son Joshua Michael Fahey and her daughter Bridgette Fahey-Goldsmith, whom are seemingly willing cohorts in her fraudulent and malicious conduct, as will be illustrated below in the example case.

In circa 2004, Lauris Fahey met a man by the name of Arthur Carlisle, who was about 78 years of age at the time, some 26 years older than Lauris. Arthur was a widower of some 16 years and with only one surviving daughter. He was well off, with a house in Brighton, which is a wealthy, beachside suburb of Melbourne. Arthur not only owned his property outright, he also had a significant share portfolio and bank balance.

Lonely Arthur probably thought he had won the lotto when he found himself with a new lady in his life, one that was 26 years his junior and seemingly cared for him. Lauris Fahey lived in a house in Leonard Street, Hampton East, a nearby suburb to Brighton, but not close to the class of Brighton. This house was owned by a company named OurBrad Pty LTD, of which Lauris Rose Fahey and her daughter Bridgette Fahey-Goldsmith were both joint directors and joint shareholders in same. And of course, this house had a substantial mortgage on it, but not for long..

Lauris managed to talk dear old Arthur into paying out her mortgage by essentially transferring the property to two parties. One being Arthur Carlisle and the other party being Lauris’ son Joshua Michael Fahey.

So from the outside looking in, it seems that Arthur’s assets are still O.K as he now owns half of this house and his will leaves everything to his only surviving daughter and or other family.

But the scheming Lauris had other ideas. She had been milking Arthur to support a failing photography business “Fahey Family Photos” which was not really a business as in a company, but a business name Lauris had under her own name as a sole trader, and to which she used to get contract work from another company. Of course this was just a ruse, as the money he supported her with was not going into building a company, more likely, it was getting funnelled off into her own private accounts.

The years go by and poor old Arthur is not doing well health wise. In fact in the time leading up to his death in 2011, Arthur was on so many medications; he didn’t know if he was Arthur or Martha most of the time.

Time for Lauris to strike!

Whilst incapacitated, all drugged up and on death’s door, Lauris gets Arthur to sign a revised will, leaving everything to her. Systematically, she has now taken all that should have rightly gone to Arthur’s daughter, and or his grandchildren. A low act if ever there was one.

Who were the witnesses to this new “will” that robbed Arthur’s family of their inheritance? Surely witnesses needed to be in his presence when he signed the new will…

Not only was Lauris Fahey, able to secure her own home with funds from Arthur, she also managed to swindle everything else he owned into her or her family’s names. Including Arthur’s own home in Brighton. In fact, when Arthur’s daughter went to his house after his death to do some sorting out of his belongings and such, she found that all the locks on the house had been changed and Lauris was inside and had taken over the Brighton property.

Lauris and Arthur never married, and they resided in separate residences. It is not even likely that the relationship was anything but platonic in nature. So it beggars belief that she was in anyway entitled to anything, not without being deceptive in any case.

By December 2011, just 6 months after Arthur Carlisle had passed away, Lauris’ son Joshua Michael Fahey claimed Arthur’s share in the Leonard Street, Hampton East property by way of a Survivorship Application, which was granted. Joshua had a mortgage on this property for his part of the proprietorship with the WestPac Banking Corporation, but he also took the 50% share from Arthur after Arthur’s death. And now we have Joshua Fahey, owning this property outright with the mortgage being fully discharged by 2018, likely in part with funds that were deceptively taken from poor old Arthur’s estate.

Coincidentally, Joshua Fahey now works with the WestPac Banking Corporation. Would they condone such behavior? It is doubtful; in fact they may look very grimly at such acts.

In closing, be warned folks, especially wealthier older men who live in areas such as Brighton, South Yarra and Toorak etc. This woman and obviously her family, have charm and the skills to fleece you and your families. 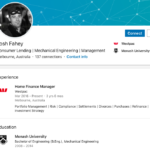 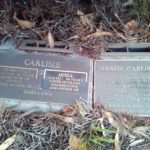