There are few times that i have ever been driven to writing a duragatory review of any co.

They make up the rules as they go along.

I bought a motorcycle and before even accepting delivery they wanted to use their triple inflated ins co . 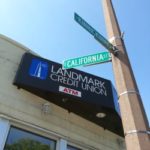