After we finalized our wedding dates, my wife and I went to Karats Jewelers. We were very specific about our requirements. The truth was, there were still five months to go for the wedding, and we were at Karats to look at some designs. We were not looking forward to buying one.

However, I believe once you get in, this Akshay Anand, who calls himself Andy, the owner of the jewelry shop, won’t let you leave without you placing the order. This guy is a scammer and mostly tricks to lure customers into buying things for extra money.

So, when we went to his shop, he asked us to place the order right away as the prices of gold were going to shoot the coming week. This was a complete lie. It was not the case. On the other hand, we did notice that the prices went a bit down the following week.

That was not the biggest of our concerns, though. This guy is a scammer, and whatever we talk wrong about him would be less of his character. So, we ordered wedding ring bands designed by Jeff Cooper. The rings cost us $2050. Andy locked the design and told me that the rings would be available the following week.

However, the next week, we got a call from him saying that the rings were not ready yet and would take another week. He also requested to call and confirm before reaching his shop as he wanted to make sure we did not have to make the trip to his shop without reason.

We did the same thing. But, more than two months passed and this guy, who told us that the rings would be ready the following week after purchase, failed to deliver it even after two months. We kept calling him every other week to know if the ring was available.

After weeks passed, he told us that the rings would be available in three days, and if they didn’t, he would give us up-gradation on our diamonds. I accepted the deal. AFTER THREE DAYS, when I checked in to his store, he said that he missed the courier. So, he gifted my wife silver earrings.

Their earrings were also fake. Because, when my wife started wearing them, her ears turned black. This wasn’t silver. We did not bother because it was for free. What else could we have expected?

The rings finally arrived after three months. We checked the rings, and they looked beautiful. We showed it to my brother and his fiancé. They said that the ring was beautiful for sure. However, she showed me her rings and told me that there was no engraving of Jeff Copper’s name on the design, and the 18K engraving was microscopic, making it look like 10K.

I further checked the design and found that the holes beneath the diamond setup were not aligned properly. We had paid for Jeff Copper’s plan, which was why that price tag. We could have gone for a cheaper ring, otherwise.

After all this mess, I checked with other jewelry shops. Everyone did tell me the design was beautiful, but none of them said that it would cost me $2050. They said that the rings were around $1000.

I was distraught listening to all this. I went to Andy and told him that I did not find the engraving and highlighted other problems with the rings. To this, he became upset and started looking like he was the soberest person I have ever known. I also asked him why the ring was not in Jeff Copper’s box and branding. He called a few jewelers and confirmed that Jeff Copper does not send rings in boxes. He made me believe in everything once again. However, the words must have reached Jeff Copper. As so much was happening around. As the jeweler told me, I also posted a Facebook photo of my ring, claiming that it was not Jeff Copper.

I forgot to take that down after believing Andy for the last time. And, thank god, I forgot. I received a call from David, brother of Jeff Copper. He wanted to check the pictures of the ring from all angles. I sent him the pictures. After reviewing those pictures, Jeff called me and told me that he did not design the ring. The 18K engraving was also done with a laser, showing that Jeff Copper did not create the ring.

Jeff told me that he would involve his attorney in this matter, and I should not let Andy know about what was happening. He asked me to ignore his calls for some time. However, Andy kept calling after that. He left weird messages like an ex-girlfriend.

The court order to settle the situation was sent to Andy. Later, the notices were also sent to Andy. I had to order the ring from another shop. For the same design, I paid $1750. They were cheaper than the ones I got from Andy for the fake rings.

I am still waiting for the refund, which I am sure I will be getting as the court is involved now. Andy is a cheater and a big liar. The rings that we received were intact and had all the red flags sorted that we had with the ones we received from Andy.

If you want to save yourself from so much trouble, do not shop from Karat Jewellers. The guy, the owner of the shop, is a con artist. He would try to make puppy faces to let you believe he is the most innocent person and never lies.

Please do not fall for his traps. He is a massive criminal. I can claim with what I have experienced with him.

Write a review or complaint on Karats Jewelers Cancel reply 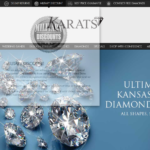