Personally, I am a man who believes in logic. It takes logic to convince me. To convince me to think about something, I need you to make me understand the substance behind talks, any talks. Many times, I have rejected to think about an idea, whose logic I didn’t understand. People always used to ask me, “Why am I being so stubborn?” I use to explain to them the logic behind my stubbornness were they being illogical. They use to categorize me into being radical. I didn’t mind their comment on me that much. I used to ignore them by thinking that they are naïve currently and will mature in time as I did. And it is because of this radical attitude that I had, I had a stronghold over stock markets. I never use to buy into the advice of people as other people often did. And earned, nicely for me and my family. People used to come to me and ask for advice and I used to deny them for it. Because I felt, what works for me is not what works for others and if it doesn’t work, they generally tend to blame it on you.

It was in 2018 December when Christmas was just about to arrive that the stock market noticed a harsh crash. It wasn’t only me, there were many others who lost a great deal of money. It was a global economic recession and crises of that time. A lot of my colleagues lost even more money than I did. And there were radical reasons for this recession and crises. It was when a colleague of mine, who actually started another business. And when I used to ask him, he always used to tell me that he won’t say it until I attend a seminar. Basically, he meant, he won’t tell me informally. It got me curious. I asked him to brief to me about what he did and why didn’t he get involved in the stock market as he previously used to do? It was one night that we were having dinner at his place that someone called him up and I recognized that the call was a business call. He informed me about the business that he did and what landed him up to do that. He mentioned a guy called Josh Linker. If you Wikipedia him out, they start by writing Joshua M. “Josh” Linker. My friend said that one of his colleagues who had lost a tremendous amount in the stock market crises had made him see a seminar of this guy Josh. And how impressed he was. And how all that we did by being radical was so wrong and that we did not know the correct method to do it, that’s the reason behind our failure. And that there was only one way to do it, and it was by making a difference and by standing out.

At first, he sounded me as if, somebody had hypnotized him. Which got me even more curious. Because of he too, as I was, a very radical one. Whenever we use to discuss the stock market, we would never invest in companies without any strong piece of information. We even would call the company to ask, if there was any news about them in the market and only then, take our call out. And suddenly he was sounding all praises for this man to an extent, he had never ever praised anyone in his life. It got me very curious. And that’s where I made my mistake i.e. I went to see this seminar about Josh Linkner. Everything about the seminar was flamboyant! The people who came there, there were photographers who would boast about Josh, there were his companions who would talk about how successful he was! How he used his brain and took a leap, which his companions couldn’t. It was really hard to differentiate between whether they were jealous or where they were full of praise. And in addition, there was my colleague, my friend who was a recent add on to the list of lauders of Josh Linkner. So it made me think,” well yeah! There must be something which I am not seeing and instead of being radical, I should maybe just calm down a little bit!” And I didn’t let my intuition speak out as loud as it really was, instead, I let them (lauders of Josh) speak out! That was the biggest mistake of my life.

You can go to his website. There is even his Wikipedia page, this guy Josh Linker is nothing else but a time-passer. He ain’t no innovator, a business driver or whatever he claims about. All he is is a motivational speaker. And a voracious reader. I think he has learned the art of public speaking from a university. At first, we were shown videos of how he learned the guitar and he knows jazz music. But none of that video showed him playing the guitar. All those videos showed was him speaking about how he learned music. It didn’t even show him taking lessons or anything, the video just made plain statements i.e. without any proofs. An interesting thing is when you go to read about the facts that he boasts about on his website, as well as in his lectures. Practically it’s not him, who boasts about it. But then he has a long list of lauders, like my colleague who keeps on talking about him, like he is what his website claims, he is. All of those five companies that his websites claimed were built by him and sold, were bought by him too. It’s crazy how a person like this has gained so much popularity that he claims he has. His YouTube videos, he puts up are about the seminars in which you see a lot of people, but don’t buy-in for that. There is a logic behind it too. He keeps most of his seminars for free. The cache here is that he and all his other lauders are into MLM Marketing. They basically, at the end of the seminar ask you to buy their product and make two other people buy it. My friend had bought it and was asking me to buy it too so that he could gain the benefit that Josh mentioned to him during his lecture. His lecture is all about motivation and statement of facts that other companies did.

He would go on about Ben and Jerry and how uniquely they are doing things by keeping the funeral of their product. But don’t buy into it, because basically what he is doing by that is he is asking your mind to take that in as a logic of keeping it busy. While the fact is that, what is Josh’s contribution to that Ben and jerry idea? Who the fuck is he to speak about that, you can read about it on Ben and Jerry’s website, if you wish too. There is not just one company that he talks about! This guy has done full research about what makes people believe things and has by hearted all the facts and he combines that with his art of public speaking that’s it! And about the degree from Berklee School of Music, I don’t know where he got it from! I am still stunned by the level of fools present in his seminar. I am very sad about the fact that John, my colleague bought what Josh told him to buy, which is practically nothing. He is even author of 5 books! That is shocking! All his books would have is what I can imagine from John’s talks, talks about other companies and not something that Josh had done. John was as radical as I was, but he couldn’t differentiate and it is hard to find a reason behind it. I am writing this review to alert you about this guy! I am shocked that this kind of thing can happen in the 21st century. It’s happening and on a very large scale and still, people are buying in, to this kind of shit! These are fake artists, who have researched a lot about advertising and behavioral studies which gives them an insight into your minds. It is nothing else but an attempt to hypnotize you. Please don’t lose your radicalism, don’t buy into whatever he says! QUESTION HIM RATHER THAN BUYING WHAT EVERY HE SAYS!

Write a review or complaint on Josh Linkner Cancel reply 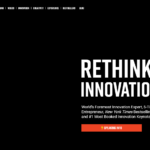