I have tried this junk course, and it sucks. Sorry for all the bad words, but there is no other way to explain how irritated I am after deciding to join this program. Jason Capital may seem like a normal person offering his skills to others in exchange for money, but he isn’t. He is a con artist who has devised this course to cheat people online. There is no better way to put it in one word than calling it abuse.

Jason Capital told me that he would prove that the entire thing worked, and all I needed to do was sign up for the course. He said that he had many offers going on the time I enrolled for it. He knew it was the right bet. He would offer me something at a reduced price, and I will feel like the only lucky person in this world. While on the other hand, he would be planning to take me down.

I feel like a fool. This person did take me down with his sweet words. He made me believe that there is no other way to get better profits in business than by writing emails. I believe that emails are an essential part of communication and can bring a lot of change to the profits (definitely in a good way). But, making it sound like it is the only way should have alarmed me at the beginning itself.

I checked myself in for the course and was fooled a big time. One must notice many things before planning to go for something that does not have a face. I would say that because Jason does not work under his actual name. Later, when I tried to find more about this person’s past, I was baffled to check that there is not much information about this person online. He has all his business under this pseudo name.

I do not know the reason behind these two lives, but it must be something severe. His background is blur and fishy. He has not much talked about himself and where he used to work or his experiences in the past. So, one has to believe everything that he says about himself.

It seems a perfect example of too good to be a true thing. The course is explained so that it feels as if it can make anyone millionaire in a day. The course says that by writing emails, Jason has earned millions from companies without pointing out the names of those companies. There is no evidence that the profits have been ever made. Jason capital will tell you stories and would like you to believe them without referencing those incidents. This clearly says a lot of things.

Not just that, if you will look into the reviews scattered on the web, you will find many of them with a lot of grammatical and spelling mistakes. This proves that the email income expert, the course offered by Jason Capital, is not legit. He bAll these show that the reviews are not legit. And, if they are, it anyway shows that Jason is not a good teacher. If he has taught people to write emails, didn’t he be responsible for training them to write correct English?

After understanding that there was not much in the course to offer, I researched online for more proof. I came across many dropouts that again prove that the course is not at all worthy. The virtues about the course that has been written online do not seem to be true. It feels as if someone has paid some overseas experts who lack English writing skills to fill those reviews on the internet.

I have seen this from the inside and know what this course has to offer. There is nothing unique or extraordinary about the course. After you complete the course, you will feel as if you made a fool of yourself. All these huge words and beautiful quotes made to get you onboard will ultimately look fake and flimsy.

When going through the course, I asked Jason if his students have made any profit by using these tutorials. Jason was too blunt to answer. He said that I am not at all the right fit for the course because I lacked intent. I mean, I am the guy whom he liked a lot in the beginning when I was about to pay for the course. When the time came to provide answers, he started being the badass. I have met many people, but Jason is the most shameless person I have ever spoken with.

If I had talked to him face to face, I would have known right away. He is a scammer and a big liar. He plays with words and makes you feel like the most special person with so many capabilities and only waiting for the right direction. He thinks that he has the right direction for you. But guess what, he is a liar. He has nothing that he can help people with.

The course is rather a torture, and those who have been with that would certainly agree with me. He talks about the email marketing strategies, which we have already been listening to for so long, being in the marketing field. If there is anything new to this, then Jason’s lies and scam make the course even more shitty.

This guy never answered the call once I asked for the refund. And, there is no one to help in case you have any problems in between the tutorial. You are on your own. I was very disappointed after going through the course and would suggest staying away from it.

If you like to learn, you can access all the free videos and content available on the internet. Those are a real help and not this course. Yes, you heard me, the free ones. They have more value than this paid course.

Jason and his email income expert and money boss are crap.

Write a review or complaint on Jason Capital Cancel reply 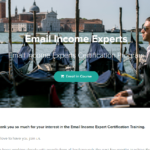