The doctor lied and completely mislead/misinformed me. When I realized this, I walked back in and calmly requested to speak to someone about my situation.

A few minutes later Doctor Khan proceeeded to lose his temper and when I requested to express my concern (like an adult) he refused and only lost even more of his fleeting self control.

To top it off, he storms away angrily, in a way that reminded me distinctly of an adolecent girl…. leaving me confused, offended, and completely unsatisfied with the entire ordeal of attempting to communicate with someone I had thought o be civilized.

After tricking me into meeting with him, he went on to tell me that there is nothing he could do to help me with the very specific concern that he had originally told me over the phone he could help me with if I just met with him.

After meeting with him, and recieving the biggest load of crap I have ever heard from a profesional in the medical field, he left me back at square one with 300+ to pay out of pocket! .

Just to top off the whole mess they scammed me into, when I asked, he refused to give me any sort of refund! I am extreemly disappointed.

I would never recommend that illtempered, out of control, borderline-senile doctor to anyone I cared about. 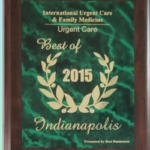