Ignacia Molinar has an address in Azusa, California, and Rialto, California, is a male but portrayed as a female online. I have personal experience since a female answered my post online and wanted my address to come over immediately. Ignacio Molinar used 626-607-6192 as his phone number and sent me multiple photos of a female.

When I asked the “female” to send a unique picture that would show the person was natural, I was immediately ghosted. Twenty-Four hours later, I received a text saying, “I am real. I’m sorry. I had to get home to my son. I wanted to go back, I did. ))!:” See attached screenshot.

I repeatedly asked the “female” to send a photo that I wanted but never received it. When I asked a relative who’s a cop about the number claiming to text me, I was told the person’s name is Ignacio Molinar. He has an address in Rialto, California, and Azusa, California.

When I said the name Ignacio, the person played it off and said that was “her” father, see attached, but never wanted to speak on the phone and never provided a single photo that would show the person is a female.

Write a review or complaint on Ignacio Molinar Cancel reply 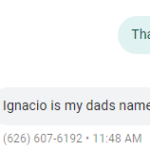 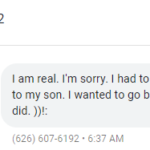