I made an appointment at the Hendrick Chrysler Dodge Jeep RAM of this week to come see a specific car. They called me no less than 5 times throughout the week checking in and confirming my appointment; they said the car would be pulled up and ready for me along with similar vehicles.

So far, so good, although I thought the amount of calls was a little excessive.

I get there on time for my appointment. I wait and it turns out the salesman I have the appointment with isn’t available so I get another guy, Brandon.

I’m taken into an office, asked some questions, and then he goes to get the keys. 10 minutes later he comes back and says it’s out on a test drive.

Why is the car I have an appointment to see at that very moment on a test drive? It’s now 5:30.

Brandon disappears and says he will wait for it to be back. He never returns.

Meanwhile the door is open and I’m sitting there staring at the wall so I finally go outside with my boyfriend and his dad, who have since shown up to be with me, and look at cars with them.

Despite Brandon having my number, he never calls/texts me to find out where I went in order to update me on the test drive situation.

Turns out the guest who had it on a test drive was hemming and hawing over whether to buy it; I know this because we came across him at the front of the dealership.

I eventually found Brandon outside around 30 minutes later and he says the guest is now inside “talking numbers” and “in the next few minutes” he should know whether they were buying or not and whether I could have my test drive.

We also wanted to test drive a truck for my boyfriend who is in the market for a vehicle, and told Brandon to call or text me as soon as he knew because we were test driving something else, which he agreed to do.

Needless to say, Brandon never contacted me. When we got back from test driving the truck with another salesman, Ben (who is great by the way).

I talked to an employee and turns out the man bought the car I was set to test drive, essentially buying the car out from under me.

Brandon never let me know anything and never offered to show me other vehicles– though Ben, the guy who we test drove the truck with, did take the time to show me other cars they had online.

I never got any type of apology or notice on what happened, such as a simple “sorry but the car has sold.”

I only found out through some other random salesman I was able to grab who went in and found out for me.

No one reached out to me about my appointment, and apparently Brandon thinks I vaporized into thin air and ceased to exist after the car was sold to someone else.

Additionally, when I was shown similar cars online at their dealership.

I felt pressured and when I told them my max budget, they continued to show me cars over $2000 above my budget, going on about how I can just finance for more months or make bigger payments each month (yeah right! Exactly what I’m trying to avoid).

I especially enjoyed how a manager tried to explain how interest works to me like I’m stupid.

The thing is, I understand interest perfectly fine– that’s exactly why I’m trying to avoid paying more of it.

I insisted on my max budget for an hour and a half while they refused to come down on the price at all and kept “going to talk to the manager” about the price I wanted and coming back with the same original number.

Mind you it is the end of the month.

If they can’t meet the price I want, that’s perfectly fine, but I wish they would just say that up front and save all of our time.

I should’ve just left when they sold the first car out from under me, which was downright rude.

Bottom line: I was prepared to purchase a car today, but their subpar service has ensured that I will be making that purchase elsewhere.

Update on 5/7 to say that a new salesman called me and asked if I’m still in the market, then proceeded to tell me that my file notes that.

I am underage and thus could not buy a vehicle– was there anyone who could sign for me– and that it said I never showed up for my appointment.

What? I corrected him that I’m well over 18 years old (no one could mistake me for being underage) and that I did in fact come to my appointment and told him what happened there.

In my opinion, sounds like someone was trying to cover their butt after the fact so that if I complained it would seem unfounded.

I told the salesman I had bad service and he offered to send me the general manager’s info.

I didn’t think this crappy service situation could get any worse but it just did.

Save your time and buy a car somewhere else where you can actually enjoy the process without being ignored and insulted. 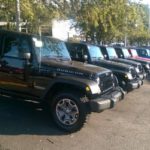