I suffer with chronic low back pain that started about 30 years ago when just a firm bed was all I needed to feel better.  Now I it’s also in my hip and a little bit in my knees and it hurts to stand or walk.   I’m told I’m not a candidate for surgery and I’m not eager to go that route as I haven’t seen great lasting results with that either.  I’m told I have two herniated disc, spinal stenosis as well as arthritis.   I did get some very minor improvement from an exosomes shot (which is a type of stem cell)  but not as much as I would have expected for the price and that was three months ago so that’s still suppose to take about six months to get the full result so I’m still waiting to see if I’m going to get any real substantial relief from that.

Meanwhile,  I’m still limping,  not all the time but most of the time it hurts to just walk and I get stabbing pains like an inflamed nerve is being aggravated AND a terrible burning pain in my back from just standing.   Sometimes,  when I’m at the grocery store, I seem to be able to walk a bit with very little pain and only get these occasional jolts like a stabbing nerve.   Thus when I saw the ad for this product on TV,  I hoped it could give me some temporary relief but it’s just not anything significant that I can really notice.   PLUS, I ACTUALLY DIDN’T ORDER THE PRODUCT.  I didn’t hit “submit”  I had cancelled the order.

What happened is that I had filled out most of the online form but never hit “submit” button (nor did I close the site) I had minimized the page while I had decided to look at the reviews and see what is on Amazon was selling  since they said it wasn’t available on Amazon.  Yes, it is on Amazon.  That was a lie too.  In fact, as a Prime Amazon member, I saw that I could buy just one bottle to try at the same price I was about to pay for four through HEMPVANA.

In fact, there were many similar products on Amazon and I realized there was also a product on Amazon that I recall said it had twice the cannibus for the same $20.   It was confusing but I knew I didn’t need to buy four bottles of this just to get a lower price when I could have tried one for the same price on Amazon.   Or try any of a number of other similar products.

I re-opened the webpage that had been minimized and deleted my credit card and ALL MY PERSONAL INFORMATION BEFORE closing the application and thought that was the end of that.

Some weeks later, I still got the product which did not contain a receipt other than just a packing slip with my order number and May 1.  I received the product on April 25.  I called them to tell them what happened and found out I was charged $79.96 for four 4oz jars of the product that I did NOT EVEN ORDER.  He kept putting me on hold and finally told me I would have to pay to return it too.   Therefore, I told them I would go ahead and try it but I was pretty certain that I would return the product as I could order one bottle on Amazon.   I told him now I would just go ahead and try a bottle as they tell you that you have  60 days to try it and can return for a full refund.

He didn’t seem too happy but I told him now that he sent it to me,  I wasn’t about to pay to return it without even trying it.  I’ve been using the product for about a week and don’t see that I’m getting any results.  Sometimes I think maybe it relaxed my back a bit but a few minutes later, the pain and burning is back.    I’m still trying it out thinking maybe I just need to apply it more throughout the day but it just doesn’t seem to do anything of note.

The other thing about this  product is that it doesn’t absorb well and will roll off in tiny specks when I rub my leg to where I have to go stand in the shower to brush it off my leg!   I took it to my pain doctor and he told me the people in the commercial are probably all actors and that often these are just creams that didn’t sell and are relabelled. We also noticed the only listed active ingredient was trolamine salicylate 10% (apparently a word for aspirin) WITH Double cannibus, tumeric, & aloe which he said means the key products for which I thought I was getting were simply at “undetectible” levels!

I’m so tired of these great mail offers and being lied to for overpriced products that also pretend to send you one free when you buy several.  This isn’t the first time something like this has happened and I take responsibility for falling for it again.   I just hope they refund my money if and when I return the product.   If there’s one word of advice for people, nothing is really free in this world.

Only “love” is free… as love is something that just happens like the sun or the moon rising or a baby being born… Love is indescribable, but don’t we all know what we mean when we say, “I love you” or “I love this”  “Love” is magic…..however, if we’ve lived long enough, too often we know that even the word love is tossed around too freely as well.  It makes me wonder, if we are lacking love in our life, are we all just looking for love when we send for these “miracle” products, miracle cures?  Think about it!

My last paragraph I wrote here just disappeared so I’m rewriting that I have noticed that there is something at the bottom of the bottle that says:  ++Compared to original HempVana Pain Relief cream.  Is this an imitation product?  The expiration on the bottom is 12/21.    I took other pictures but they all come out upside down and I don’t know how to fix that.

I have now noticed there is a fake e-mail address as there is no “@* you ask for.  The two e-mails on the product and on the paperwork are simply:  www.Hempvana.com or  they tell you to visit:  www.hempvanastore.com    I bet none of these work.   I’m only able to attach one picture and I tried to send you three. 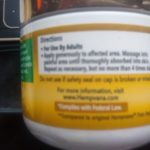