Similar to the kid who moves to a new school and tells lies about how cool he was at his former school to his new classmates — Greyskull showed up on Maui in 2010 with wild tales of how he was the only person on Earth to have a lost strain called Sour Dubble, Mother of Gorilla Glue #4 (during the period that Gorilla Glue #4 was being celebrated as one of the strongest strains on Earth).

Strain-gely nobody in San Diego can vouch for Greyskull’s story, because he is not even from San Diego: he is from Oklahoma!

Did he “find” Sour Dubble in a corn field in Oak-la-homa or did he find a seed of a clone only strain in one of his fragrant fake dreads??

One of the Greyskull San Diego Pakalōlō Pirate Gang members, who engaged our representatives in discussion, says Greyskull “found a single seed of Sour Dubble in a import pound from San Diego home of Sour Dubble”.

1st off: if this mythological seed even did exist, there would be no way to verify if was pure Sour Dubble & not a result of accidental pollination by a hermaphrodite in the grow room. Plus, California warehouse weed importers are notorious for putting popular imposter names on pounds so they will sell.

2nd: Sour Dubble is a CLONE ONLY strain that the original breeder says is lost, yet now Greyskull “found” it?

3rd: Greyskull San Diego is not even from San Diego he is from Oklahoma??

How does a newbie from Oklahoma get in with tight clone only cannabis circles in San Diego after only a few short years???

Probably the same way he becomes an online forum expert on Hawaiian Cannabis Culture in less than a decade:

By faking the skunk funk online.

Greyskull The Grower is a Pakalōlō poser. He has no idea about Hawaiian Cannabis Culture because he is an outsider — yet he opens his big fat mouth online as if he is all knowing & all seeing.

Greyskull spreads misinformation about Maui Wowie & Alaskan Thunderfuck being names to put on regional specific cannabis without a clue that Maui Wowie is a old school, world renown Hawaiian Sativa strain & Alaskan Thunderfuck is a hybrid that was bred specifically so it could be cultivated outdoors in Alaska during their legendary long sun light days by crossing a California Sativa to a Russian Ruteralis x Afghan Indica.

Ruteralis produces an auto-flower response allowing a plant to flower when there are over 12 hours of sunlight.

Greyskull doesn’t know abour these strains, yet he speaks on them online as if he was an expert.

Just like the girlfriend who is always jealous, suspecting you are cheating (all the while she is the one getting down around town) Greyskull & his gang of punk Pakalōlō Pirate posers question the validity of every other breeders genetics — yet it is Greyskull Seeds passing off a fake Sour Dubble to sell their random hybrid seeds!!!

The real High Times Cannabis Cup is open to the public.

What do these Pakalōlō Pirates have to hide???

Write a review or complaint on Greyskull Seeds Cancel reply 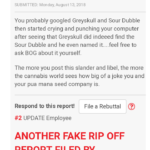