I am a usual buyer of Stavia from a different Green Society. I shop online most of the time. And, have never felt so much cheated ever. But with GreenSociety.io, it was my worst experience. The website shows a lot of discounts going on. However, there is not anything you get for the price you pay. And, the customer service sucks. Trust this, these guys are parasites who like to feed on your money, instead of working for it.

It was a month back when I ordered Stavia from this website. The product was named ‘Super Lemon Haze by Green Supreme’ and I wanted to try it from this website knowing they were offering huge discounts. They had few options for the same. For different packet sizes, the prices were different. So, I chose to go with 28 gms. And, the order was booked.

It showed me the price was $280 without discounts. So, I applied the coupon and the price was adjusted. So, I decided to make the online payment for the product. I followed all the instructions precisely and they charged my credit card for the amount. I did not check the message from my credit card company which was a huge mistake.

After a week, I received my order. They had sent me the smaller packet. It was only 7 grams, not even half of what I ordered. The customer service is available at office hours. So, I had to take out time from my work to contact them. However, I did not find any phone number on their website and had to email them about the problem.

They took almost a week to reply me back. They said that they would send the extra amount to me at the earliest. They also asked me to send them the pictures of the item I received before being able to deliver me an extra amount. I did that right away. The days passed by and I did not receive any confirmation email saying that they had sent anything from their company. I wrote them back and there was no reply for almost three days. They reverted saying that these things take time.

I waited for the entire month and then decided to return the item for a refund. So, I again contacted the team to send me the address where I could ship the product back. I had opened the package knowing that they would send me the extra amount left. And, I had used it once or twice. But I did not find it effective either. That was the reason I decided to return it for good.

But these people replied saying that they opened packages are not accepted. I asked for a refund for the remaining amount at least. And, they said that they would think about it and will let me know. I knew the battle was going to be longer. So, I checked with the credit card statement and found out that the discount was never applied. It did a show on the website when I was paying through. However, my credit card was deducted for $280.

I mailed the statement to the customer service asking for a reason. And, they said that it was the actual cost of the item. I said that I did apply the coupons and the website showed me the discounted price as well. To this, they said that the discount must have been expired. And, I may have checked it incorrectly.

This is insane. I already have been waiting for the remaining product and I never knew I was cheated way before that problem even surfaced. These guys did not provide me with transparent answers. They were trying to avoid me at all times. I asked in the mail for a direct contact number or to ask someone from their team to call me back. However, they provided a negative response to that. It is difficult to deal directly and lie upfront. Maybe that is why they do not offer call support.

I am still waiting for the refund and the remaining Stavia never reached me. To add to the remorse, these guys have been emailing me a lot of discount offers since then. I have been receiving emails every now and then. I am sick of these people.

GreenSociety.io is a fake website with useless products. I tried their one item which was nothing but crap. These guys have no empathy for their customers. They reply later, never provide resolutions, and above all, lie to their customers.

I am sure they have been fooling others as well. There are so many great claims they make about their products. But all seems to be dubious. I was flattered by the way they have described their product and that was another reason why I chose them over my usual vendor. The discount still being the primary reason to try their product. These guys do feel that they can cheat anyone and nothing would ever come in their way. That is not true though.

From now on, I am making every effort to spread my verdict all across Canada to ensure no other customer is cheated the way I was. If there is anything that GreenSociety.io can sell, its lie. The company is a scam and frauds people out of their money for shit that they sell. They have no room for improvement as they do not wish to provide any better service.

All they want is your money. Cancel the promotions right away if they float on your screen. They are best at getting your attention but does nothing to fulfill their promises. These guys are wonderful liars and have learned how to ignore people patiently.

I kept them mailing and seeking answers and they kept avoiding me. That also needs a lot of training, isn’t it, being so cold to other’s problems. Anyway, if you are at all thinking of placing your order to this company, think twice. You will be ripped off with your money and would get nothing in return. Their products are fake as they themselves are.

Write a review or complaint on Green Society Cancel reply 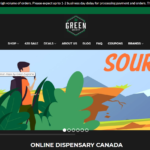