I was looking for my website’s search engine optimization service provider. I had begun this website for a long time now and wanted it to be listed as top as it can get on Google. As you might know, everything that is on the first or second page of Google sells. And that on the second, third and fourth page is something no-one cares about.

My website is something that was my dream. I had never ever compromised about money for its setup. If I did not have the money to get a service that I had liked, I would wait until I earn it but never opt for something cheaper just because I did not have money at that point. This is to say to let you know how deeply I thought about my website. And so when it came about providing SEO services to some firm I was pretty serious about doing that because the heart of any website, is its content. And also because I have had a bad experience and heard people having bad experiences with content.

Since as a layman you can never know about the algorithm that’s being used by Google. These guys can benefit from the fact and fool around with you. Although you knew the basic facts right. But it was hard to understand, overall, how the SEO worked. And it was after visiting many places to get the information, I figured out everyone had their own ways. Not only that but also everyone did guarantee to make sure to get your website on a Google ranking that was respectable. So I began dealing with GODADDY SEO SERVICES after YELP ripped me off. Please see my Yelp ripoff report also. It will help you understand how this whole business functions and get you out of your doubts which we think we have before invested. But then you’ll realize that we have these doubts because of them and that they should do something to improve the understanding that prevails in this absurd business of SEO and content writing.

First of all about the definition of content writing. It is so absurd that these to similar-looking words are brought together which have the same meaning. You have generated some content if you have written something so either you could be a writer or you could be someone who generates some content. But this absurdity puts both the words together. And there is not just this but a lot more.

Yelp I dealt with for 2 years took down 21 5 star reviews at one time as well as putting my company which is J&B HAULING a junk removal junk HAULING company under junk car buyers. This was a transformation on whole. We were also into, junk yards, used parts sales, etc. Not only because of this my time was invested in things I didn’t want it to be invested in, but also it resulted in eating my budget a bunch of unwanted calls costing me money-wasting the customers’ time and making YELP a lot of money. This is how I was ripped off by Yelp. Basically you are targetted because you know a little less than they do. If such is the case with every business, god knows where humanity will end up one day! But that’s their deed and not ours. God always punishes the bad doer and praises the good. And as I wasn’t the one doing anything wrong here, I considered myself to be on the safer side here.

So I switched to GODADDY 1-25-19 1st phone call they asked what do you do? I said haul junk to the dumped dirt rock concrete rent dumpsters and have a bobcat. They asked do you do residential?

I said yes both commercial and residential. So they put me under residential hauling vs junk removal junk hauling. Basically they gave me a search term, or what they famously call ours as a keyword, that hardly anyone looks up to for. I later realized about this by thinking process that, what would I search if I was the one who wanted to opt for the service that my business provided and what would be my set of difficulties that I would face! that’s how I came across this. And how can I overcome it? No one looks for this term. All the search is by typing junk removal junk HAULING. Godaddy refused to change the search term keyword till 7-25-19 when I made them put it in writing no more residential we will put you in junk removal junk hauling. Well, it’s now 9-12-19 and 0 calls resulted from GODADDY SEO TEAM.

All calls either found you on Yelp whom I haven’t dealt with in almost 1 yr referrals or regular clientele . Calling is something you would never want to do with a service provider like them. Because then they boast of the technical terms that they know and you do not and god knows what else. I’ve been here in Las vegas doing this work since 11-9. 4500 is too much to take from someone and not do your job your paid for and too much to pay someone to not be seen or found under your perspective category for not doing business with GODADDY SEO unless you want to be ripped off!

And not just go daddy, I say the same fo Yelp too. It isn’t something that I have been paid for any organization to post negatively about the other. I am just writing this to make people aware of how they are fooled in the name of increasing their business, just because they do not know the algorithm on which the Internet runs. But guys I tell you, this is not the way how you should work! We people are very sentimental about our businesses and making theme grow. And if you keep on doing these sorts of cons, one day it’s going to come back to you. I don’t know how, but it will.

Is Godaddy legit?
Godaddy is not a legit business owner or provider. They are not aggressive towards their customer satisfaction and complaint grievance, and hence 1 consumer(s) was/were given a Godaddy as a negative rating, and only a few left positive feedbacks.
Where is Godaddy located?
Godaddy is headquarted at USA. We do not have any affiliation with the better business bureau or yelp reviews platform. You can contact Godaddy by dialing +1 4804638389 or visit their website www.godaddy.com.
How much monetary loss is incurred by Godaddy’s customers?
According to the reviews posted by Godaddy’s customers, US $4500 was the total loss incurred, and hence the severity of the scam is high.

Write a review or complaint on Godaddy Cancel reply 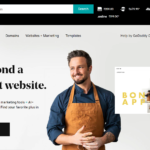