I ordered women jersey from FUBU. It was three months back when I made this order. The outfits on the website are trendy and stylish. However, the website did give me a hard time to order because of the poor design of the website. I was not able to go back and there was no button on the website to do so. Although I could get to the previous page by the back button of the browser. However, that was not that much of a problem. I just needed to ensure you get to know what exactly you are getting into. It would be difficult when you will have to use this website often for single order because of so many mistakes they made while trying to send my order.

When the order was made, I got a confirmation stating that it would reach in 15 days. It was too much of waiting time, but I decided to wait anyway. I did like the outfit very much. I almost forgot that I had ordered and the delivery was expected in a few days. I got busy with my routine. There were no updates on the package and I lost track of time. After 20 days, suddenly I noticed that the time has already passed and I had heard nothing from FUBU. They had never mailed about a late package.

I called the number on the website and they said that the order is a bit delayed and would reach in two days. It did reach me after two days. However, I was so disappointed to see that the order they sent was torn. It had two cuts and there were several holes on the jersey. I called the customer care team and they said that they would send me a replacement. And, needed me to send them the picture of the jersey. I clicked the picture and sent them the same. They said that they won’t require me to send back the jersey as it was already of no use.

I was at least convinced that they would not ask me to send that package back to them. After a week, I received another order. This time, they had sent me a different jersey. I believe it was someone else’s package. However, I kept it thinking that again there would be a problem if I continue calling these guys.

Later, a week after that delivery, I got a call stating that there was a mistake in the delivery and they would be sending someone to pick the order. It was someone else’s order. Exactly as I figured it out. I told them that I had already used it once. For this, they said that the order was of higher cost and I needed to pay for the order.

I said I was ready to pay the difference cost. To this, they said that the order is not yet cancelled from my end, the old one. They had already sent the package and it was in transit. They advised me two things. They said that I either send back the package or I pay for this one and once my package arrives, I cancel and send back the jersey I ordered to get a refund. This was too much of a task for me.

So, I paid for the jersey and waited for my package to arrive. I waited for two weeks more and the package did not come. There was three times, I called these people for sending me the package so that I can cancel it from my end. But that never happened. Finally, I asked for a refund anyway and they said that they cannot do that until I send the jersey back to them.

This was so irritating that I asked for a supervisor or someone else in charge of everything. They never connected me to anyone else. They asked me to wait a little longer. It was almost two months after the order, that I received that package and this time, it was not what I expected. They had sent me the same jersey but of different colour. This is so disgusting.

I cancelled the order and sent the package back to them. They ensured that the refund would happen. After a week, I tracked the package and it showed that they had received it from their end. There was no update from their end though. So, I again reached out to these people and they asked me to wait a little longer. Again, they asked me wait again. They said that it takes time for the system to update things from another department. After few days, I got an email that the package was received by the company and they would be initiating the refund. But, the refund was not made.

I have been calling them since. However, they say that they cannot do anything. They cannot refund the amount twice. They sometimes, disconnect my calls in between and never call back. I have been calling them twice a week to ask for the update. But they seem to be sleeping over my case. I am never ever going to order from these guys. These people are scammers and fraudsters. They cheated me. I have had no trouble before when ordering online. I am never going to use their services and ensure that none of my friends and family ever order from this website. If you wish to save your time, stay away from this crap. These people are unprofessional and very irresponsible.

Is FUBU legit?
FUBU is not a legit business owner or provider. They are not aggressive towards their customer satisfaction and complaint grievance, and hence 1 consumer(s) was/were given a FUBU as a negative rating, and only a few left positive feedbacks.
Where is FUBU located?
FUBU is headquarted at 214 West 39th Street, Suite 1001 New York, New York, 10018, USA. We do not have any affiliation with the better business bureau or yelp reviews platform. You can contact FUBU by dialing +1888.405.8891 or visit their website fubu.com.
How much monetary loss is incurred by FUBU’s customers?
According to the reviews posted by FUBU’s customers, US $420 was the total loss incurred, and hence the severity of the scam is extremely high.

Write a review or complaint on FUBU Cancel reply 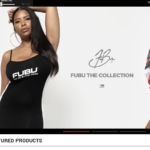