Former Beverly Hills attorney Felipa Richland was found to have lost numerous cases that resulted in her being forced out of Beverly Hills and now has a run down office in Westlake Village an hour north of the posh city. It was reported Felipia Richland suffered several major losses for her clients. One recent case illuminates how low Felipia Richland went to find a client to sue for. In Felipa Richland v. Jeffrey Ketelhut et al.2d Civil No. B272028, Felipa Richland sued a HOA over grapes (literally) lost at the trial court level then appealed. The Court of Appeal found her case lacked any merit and denied the appeal. The Court of Appeal also said in part the, “remaining grounds for contesting the award of attorney fees are rejected for lack of meaningful legal analysis with supporting citations to the record and pertinent authority.”

In 2018, Westlake Village attorney Felipa Richland found herself at the wrong end of an elder-abuse claim in Soracco v. Felipa Ruthie Richland, filed in the Los Angeles Superior Court. Elder abuse is a serious matter and no one, including Felipa Richland should be able to pray upon the old and infirm.

The child molestation report is in San Diego Superior Court Case No. 37-2017-0036344. Now it appears Felipa Richland has sunk to her lowest low where she solicits the help of an attorney like Scott McMillan who recently had his law school found to be a fraud by the State Bar of California.

Yes, that’s right La Mesa Attorney Scott McMillan was also the Dean of his very on law school, McMillan Academy of Law. In over a decade of existence the law school has had a single graduate. Prior to being terminated by the State Bar, the law school had to post a warning to potential students the school was a scam,

“We have had one student take the First Year Law Students’ Examination and that student passed. This is the basis for the 100% pass rate thus far. As of yet, no students have graduated from the Academy.”

Consumer beware about unethical attorneys or attorneys with a loss record like Felipa Richland. From Elder abuse to associating with child molesters, there are plenty of attorneys in California who are good upstanding people than to pick the bottom of the barrel.

Write a review or complaint on Felipia Richland Los Angeles A... Cancel reply 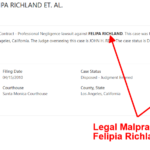