I made the mistake of telling Dr. William Naber my insurance was soon to run out.

At this he insisted I get blood work, amongst other unnecessary and expensive check ups.

I explained that I didn’t not have the money, but he assured me my insurance would cover it.

As a naive young girl, I believed him.

Then I was sent a $400+ bill. I called back and tried to explain this error to the receptionist.

She was not helpful, and would not allow me to talk to Dr. Naber.

She apparently couldn’t seem to figure out my insurance… I called back and left a few messages asking for him to call me when he could, or else to call my insurance.

I left them numbers for my insurance company.

I called back another time, leaving messages.Then I heard nothing for two years.

In that time, neither my address of my phone number has changed.

Seeing as I was not contacted, I assumed it had been taken care of.

Two years later, my MOTHER gets a call from a collections agency.

So now, obviously I no longer have the insurance and I have a $400+ bill that I was assured I would not have to pay (at the time of my visit).

Why would they not contact me? Why is it so hard for them to call the insurance company?

Why would they ignore me and not even hand over the correct information to the agency?

Why would they lie to me, knowing I cannot afford this?

In my opinion Dr. Naber is only interested in how much money he can get out of his patients. 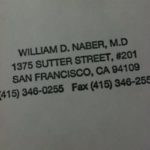