I have very bad experience with Dr. Timothy T. Nguyen, DDS. This doctor is the worst I have ever met. I was in very pain and I needed some solution at the earliest. However, I was denied the help even after promising everything.

The oral surgery and dental centre in Milpitas cares for no one and are truly irresponsible about their patient’s problems. I called the clinic for the earliest appointment with the doctor. However, after every request, they told me to come after a week. I was on painkillers and the condition was getting worse every day.

I requested them a lot. Somehow, someone cancelled the appointment and they let me meet the doctor. I was very upset because of the pain and these guys were doing no good to me either. The doctor also seemed to be in hurry. He checked my teeth and gum for a minute, wrote some pills and then asked me to come with appointment for next visit.

When I asked about the problem, he just said that nothing to worry. Come after a week and then we will see the progress. I felt as if I was cheated. I was not even given a reason for the pain. They eve sent another patient while I was still trying to consult about the problem.

After a week, I reached as per the appointment and they made me wait for 2 hours. They said that the doctor was on leave the last week and was running late for the clinic. His plane was late, they mentioned. This is very unprofessional.

They asked me if I had insurance. I said no. They bluntly said that they do not allow patients with no insurance. It sounded weird. They even rejected to schedule the appointment for a person came looking for the doctor because he was of different ethnicity.

I just looked at them. They said to him that they only see patients who are Americans. This was the most racist thing I had ever heard. Anyway, I tried to talk them into the problem. They were convinced to let me in. I wanted an explanation for the pills as there was no relief in my pain. Moreover, they had charged me so much on the first visit.

The doctor again tried to ignore my concerns and asked me to continue the pills. I could not take that anymore. I refused to see him again and left. I consulted another doctor and I am so happy that I did that.

This clinic has no ethics. I am sure that the doctor is racist and money minded. He should not be allowed to practice. 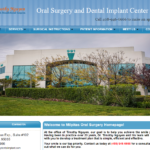