Dr. Kushlan Michael, however educated and great he is in the field of gastroenterology, is horribly unkind and disgustingly disrespectful to his staff.

Terry (his office manager ) is /was the most helpful and kind employee I have ever encountered at ANY doctors office .

The doctor treated her so horribly that I later decided to cancel my future appointments with him.

I cannot support a doctor that verbally abuses his staff that deserve so much better.

He needs to be educated on how to treat the ones who work for him because no matter how great he is as a doctor , he will not be remembered for that if he belittles staff that are outstanding at what they do. 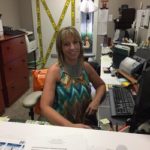