I consulted dr. Gary motykie for getting my nose job done. I had heard about his work from a friend. She said that she consulted him once. Although she never went for the surgery because  dr gary motykie pricing was too high, but she liked the way dr gary advised her about her nose problem. When I went to consult him, he wasn’t in a very good mood.

I mean, the way my friend described, I was expecting him to be smiling and greeting me. But, he felt so difficult to talk to. I thought that it maybe his one of those bad days. I ignored his attitude. And, he asked me few questions about what I wanted. I told him that I did not have much problem. I just wanted to refine my nose tip.

He advised me to book for the surgery and said that it would not take much time as it was a very normal surgery. I booked my date after a week. The surgery happened as per the booking date. In the meantime, I had few more concerns that I wanted to ask him. So, I called to book an appointment. However, I was denied the appointment as he was very busy that week. So, I asked to reschedule the surgery date as I wanted to consult him once more before the surgery.

I was told that if I cancel the date, I will have to wait for two months. As the slots were all booked. It was silly of me to believe in everything that these people told me. The guy who was going to operate on me and was going to work my nose was not ready to talk to me for few minutes. And, I was so desperate to get the rhinoplasty done that I completely ignored his attitude.

The surgery was a disaster. He did not even bother to ask the problem I had before the surgery. When I tried to talk to him right before the surgery when he came to settle me in, he said that I should not confuse him and let him do his job. He told me that he knows what I need better than me.

And left. The l next I saw him after the surgery. I was given anaesthesia and do not know what he did to my nose. After the surgery, when the tapes were removed, I checked my nose and shouted as if I was not the same person at all and not in a good sense. I am a good looking woman which I doubt I can claim anymore.

The one side of my nose is completely pinched. I checked with the other surgeons and everyone is telling me that I would need major reconstructive surgery. When I showed them the picture of me that I clicked before the surgery, every other doctor was feeling sorry for me.

When I tried to ask the same questions with dr. gary, he seemed cold and careless. He told me that I asked for this and that is how he did it. He did not feel any problem with my nose. He is not ready to pay me back and refund my money. The worst part is that he did not offer to arrange the reconstructive surgery for free. Even if he would have, I wouldn’t have agreed to it. The person who can mess my nose in such a worse way can do nothing good at all.

I am not going to trust him ever in my life. This butcher is not a doctor but a scammer. I happened to came across an ex-employee who was working for the last day when I was released. He told me a lot about this doctor. He said that the pictures on the internet and on his website that portrays the before and after photos are all fake. Dr gary motykie website is filled with fake pictures. This surgeon has never done a fantastic job. Moreover, he informed me about worse conditions the patients have been with after the surgery.

I was not able to breathe properly after the surgery and I will be requiring a surgery soon after the first one is healed. This is all because of this careless and fake doctor. dr motykie is a monster and all he cares about is money. 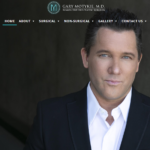