It really sucks you have to leave at least one star because Dr. Darith Khay does not deserve it.

He has to be the worst doctor around. Took my friend here for TIA’s he was having due to high triglycerides.

The doctor said it was anxiety had to seek second opinion and treatment elsewhere which caused alot of distress.

My friend who is allergic to bees got stung and Dr Khay refused to treat him because his throat wasn’t swollen.

Had to follow up with urgent care who took him right in gave him a shot of ephedrine and medication and told him he could have had a fatal outcome.

This guy doesn’t listen to his patients. He is awful needs to have his license to practice revoked.

His refusal to treat my friend could have cause him more illness or death. 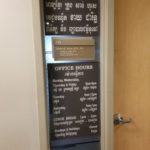